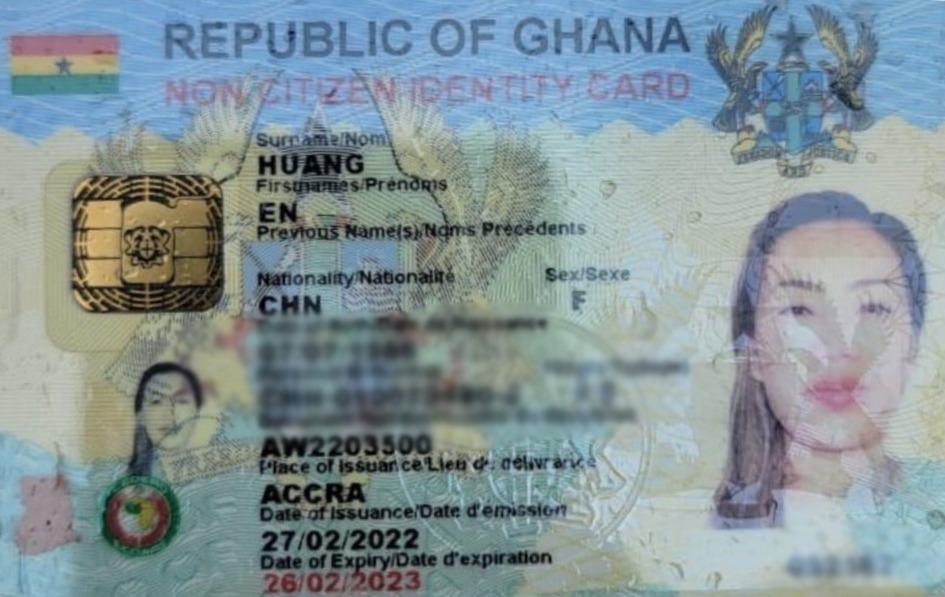 Following her arrest after she reportedly sneaked into Ghana to again engage in illegal mining activities, more details are emerging about the Chinese national, En "Aisha" Huang.

It has emerged that after she sneaked into Ghana, she successfully renewed a NON-CITIZEN IDENTIY Ghana Card which, has a validity date of February 27, 2022 to February 26, 2022.

Details on the card, labeled as a Non Citizen Identity Card has the date of issue as February 27, 2022 and expected to expire on February 26, 2023.

It has her name as En Huang on it and it was found in her possession when she was arrested, Graphic Online has gathered.

Non Ghanaian citizens resident in Ghana for over 90 days are able to obtain NON CITIZEN IDENTITY Ghana Cards pursuant to obtaining a resident permit by the Ghana Immigration Service (GIS).

She was deported from Ghana to China in 2018 after she was linked to a series of illegal mining activities in the Ashanti Region.

By that, she escaped prosecution for the alleged illegal mining activities she was earlier arrested for.

It has emerged this week that she is back in Ghana, allegedly obtaining a Togolese visa to fly into Togo, and then sneaked into Ghana under a different name - Huang Ruixia.

The National Identification Authority (NIA) has confirmed that the valid "NON-CITIZEN IDENTITY CARD" (Ghana Card) in possession of En "Aisha" Huang is authentic.

She did her first application and registration in 2014 at the Foreigner Identification Management System (FIMS) registration centre at Nhyiaeso, Kumasi, in the Ashanti Region. Her biometrics were captured and she was issued with a Non-citizen Ghana Card.

But even though, she was deemed to be a deportee, she reportedly sneaked into the country and successfully renewed the card with the new validity date on it as February 27, 2022 to February 26, 2023.

However, according to the NIA, the renewal was done on August 25, 2022 in Tamale.

According to the NIA, on August 25, 2022, she visited an NIA Registration centre in Tamale in the Northern Region and renewed that "Non-Citizen Ghana Card".

But that according to the NIA, was not without an incident as she had tried to register as a fresh applicant with the name RUIXIA HUANG.

In a press statement dated September 6, 2022, signed and issued by its Acting Head of Corporate Affairs, Abudu-Abdul Ganiyu, the NIA explained that, "on 25th August 2022 at 10:35 am, an incident occurred at the FIMS Registration Centre in Tamale, Northern Region, involving a Chinese national who visited the centre as a first-time applicant with the following details: Forename: RUIXIA, Surname: HUANG, Date of Birth: 07-Nov-75, Passport Number: EJ5891162.

"The registration, however, went into a technical state known as ‘RejectedDueAFIS’, which meant that the biometrics of RUIXIA HUANG possibly matched that of an already existing person in the NIS database," the NIA explained.

"The registration officer therefore sent a request to the technical support team for further investigations. This revealed that, based on the biometrics provided, “RUIXIA HUANG” had previously registered as EN HUANG in the FIMS record under the NIS database."

"When confronted by the registration officer with this information, she claimed to have changed her name. As per NIA’s normal registration process, EN HUANG was asked to provide an official certified affidavit and a gazette as required by law to support the change of name if the details in the passport with number EJ5891162 were to be used to update her old records."

The NIA explained further that EN HUANG was then given the option of waiting to bring in the required documents before her details could be updated or renewing her old registration with her Personal ID Number CHN-010039480-J, without any change in details.

She opted to renew with the old details and then go through the affidavit and gazette process after which she would then provide the documents for the update to be done.

Her renewed Non-Citizen Ghana Card was then issued to her on 25th August 2022, bearing the details, Forename: EN Surname: HUANG, Date of Birth: 07-Jul-86 Personal ID Number: CHN-010039480-J. This card is what is now impugned and trending on social media (Images attached), the NIA added in the explanation.

Since 2012, the law has required all foreigners permanently resident in Ghana (i.e., for 90 days or longer), who are not diplomats or representatives of international non-governmental organisations, to register for and acquire the national identity card of Ghana.

The card issued to such qualified foreigners is the "NON-CITIZEN IDENTITY CARD" and is so captioned in red lettering above the card holder's personal details. This distinguishing information in red does not appear on the Ghana Card meant for Ghanaian citizens.

The qualified foreign applicants pay a statutory fee of US$120.00 for the Non-Citizen Identity Card which is valid for one year and is renewable every year at a fee of US$60.00.

The NIA went further, "It must be emphasized that possession of the Non-Citizen Ghana Card does not confer or amount to having Ghanaian citizenship.

"The NIA’s verification system functioned as designed to enable NIA prevent HUANG EN from registering under a new name and date of birth for a new Non-Citizen Ghana Card, despite her being in possession of two Chinese passports.

"The matter is being investigated by the security agencies. The NIA wishes to assure the general public that its technical system remains robust, and it will continue to jealously guard the boundaries of Ghanaian citizenship and prevent unqualified foreigners from obtaining the Ghana Card meant for Ghanaian citizens."

Last week, she was arraigned at an Accra Circuit Court with three others for allegedly engaging in illegal mining in Ghana.

En "Aisha" Huang is facing an additional charge of engaging in mining without a licence.

They have all been remanded in police custody.

Meanwhile, the Attorney-General has called for the new docket regarding offences En Huang, the Chinese "galamsey queen" popularly known as Aisha Huang is said to have recently committed.

Graphic Online gathers that the Attorney-General intends to re-initiate prosecution in respect of the old offences for which she was standing trial before her deportation in 2018.