Dr Bawumia calls for rationalisation of educational systems in sub-region 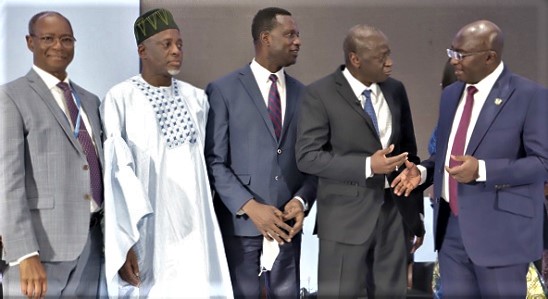 Vice-President Bawumia (right) interacting with Ousmanne Diagana (2nd from right), World Bank Vice-President for West and Central Africa, after the opening session of the conference. With them is Dr Yaw Adutwum (3rd from left), Minister of Education. Picture: SAMUEL TEI ADANO
30.5k Shares

The Vice-President, Dr Mahamudu Bawumia, has called for more effort to rationalise the governance of educational systems to achieve greater coherence, cooperation and coordination.

He, however, cautioned that Africa would not be able to deliver change without building and sustaining political momentum in the region.

Dr Bawumia was speaking at a day’s conference aimed at promoting human capital in the respective regions of the continent in Accra yesterday[June 27, 2022].

It was attended by 22 ministers of Finance and Education from Central and Western Africa.

The conference, which was interspersed with panel and break-out sessions, was under the auspices of the World Bank.

The Vice-President said Ghana’s educational agenda could benefit from collaborations and synergy with its regional partners and, therefore, urged the conference to explore how to spur the collective growth of the continent because “alone we can do so little, together we can do so much”.

He said the country had introduced some key policies and reforms to strengthen the quality of education and its management across the sector.

According to him, in the last five years, the government had initiated some reforms to reposition the entire educational system in the country.

They included curriculum, assessment and the introduction of a national standardised test to enable the country to evaluate students’ performance, as well as the implementation of a pre-tertiary accountability framework, he said.

He said reforms of secondary education, with focus on access to free senior high schools (SHSs), which was introduced in 2017, had led to increased enrolment from 800,000 in 2017 to 1.3 million students this year.

“What is even more enlightening and remarkable about this increase in enrolment is that more girls are enrolling in SHS. Today, we have virtually parity between boys and girls in SHS,” Dr Bawumia said, adding: “We have also seen the establishment of the Commission for TVET, and more recently the TVET Service has also been established.”

But, like the rest of the world, the country was also dealing with the consequences of the COVID-19 pandemic, issues of learning and poverty, he noted.

The Minister of Finance, Ken Ofori-Atta, called for the sensitisation of the youth of the continent to the importance of education and the need for sustainable peace for economic prosperity to discourage them from migrating for greener pastures.

“Across the continent, the Central and the West African sub-regions have the highest growth in the population of young people. Between 2000 and 2020, the under-25 population increased by 82 and 68 per cent, respectively, compared to 18 per cent in northern Africa,” he said.

According to the minister, it was critical for stakeholders to realise the continent’s comparative advantage, saying “the demographic development could be a huge asset to achieving the Africa we want”.

He further urged member countries to take care of the global financial architecture to ensure that the continent leveraged its 60 per cent arable land.

The World Bank Vice-President for Central and West Africa, Ousmane Diagana, commended the government for the introduction of various educational reforms and said: “we need to improve education in West and Central Africa”.

He said the regions were in the process of developing a strategy, in partnership with the governments and other stakeholders in the educational sector, to ensure that education responded to the needs of the continent.