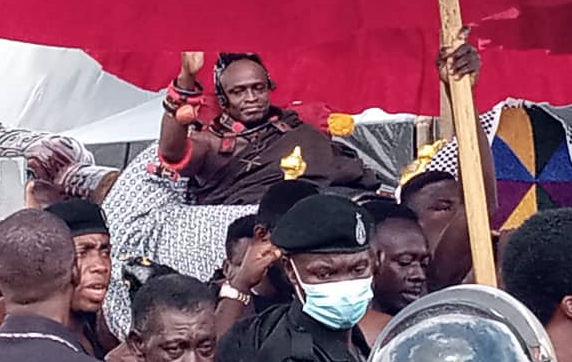 Daasebre Kwaku Boateng III, the new New Juabenhene, riding in a palanquin upon his swearing-in in Koforidua yesterday Follow @Graphicgh

The new Omanhene of the New Juaben Traditional Area, Daasebre Kwaku Boateng III, yesterday swore the oath of office to the chiefs and people of the area, pledging to be truthful in all his undertakings.

The ceremony, which took place at the forecourt of the Yiadom-Hwedie Palace in Koforidua, the Eastern Regional capital, affirmed his position as the substantive paramount chief after he was introduced to the chiefs and people on June 6 this year, and undergoing confinement for 21 days.

In line with Asante custom and tradition, after swearing the oath of office, the divisional chiefs of the traditional area took turns to swear the oath of allegiance to him.

It was followed by Daasebre Boateng riding in a palanquin and paraded through the principal streets of Koforidua amid traditional music and dance by a large following.

Daasebre Boateng told the gathering, which included the Omanhene of Juaben, Nana Otuo Siriboe II, that he would continue with the legacy of his predecessor “who stood for the peace and development of the New Juaben Traditional Area”.

He said continuing the legacy called for the support of the chiefs and people of the area.

Nana Otuo Siriboe, who is also the Chairman of the Council of State, said anyone who accepted to be a chief should be truthful to the people at all times.

He explained that any chief who told lies to his people would be fed with lies by the people in return.

The Juabenhene advised the new Omanhene to respect his subordinate chiefs and the entire people so that they would in turn accord him the necessary respect as Omanhene.

With regards to the development of New Juaben, Nana Otuo Siriboe told Daasebre Boateng that since there were no tribal wars to be fought like in the olden days, he should lead the people in carrying out development projects in the area.

He further told Daasebre Boateng to help to create job opportunities for the youth in the area.

That, the Juabenhene stated, would eliminate poverty and improve the living conditions of the people under his paramountcy.