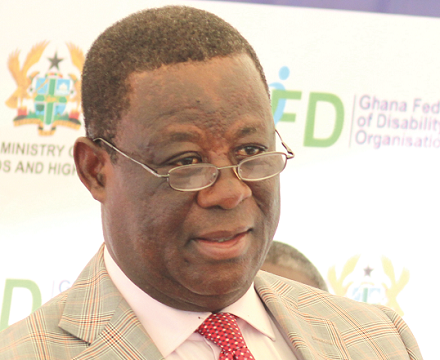 The situation has therefore, affected the movements of people as well as farm produce across the markets in the two areas.

In view of that, the residents of the area have appealed to the government for the speedy construction of the stretch of road to boost economic and farming activities.

They said the situation in the area which was noted for the planting of maize, cassava, yam and tomatoes, and other food crops was negatively affecting economic activities in the area.

Aside from that, they said, the road had also become a death-trap, posing danger to people travelling on board vehicles across the two districts.

A resident, Mr John Ahiale, told the Daily Graphic that although the road was in a bad state, the current rain had worsened the situation, “thereby making it difficult for people to move easily in between the stretch of Akatsi North and South.”

The Paramount Chief of the Ave-Dakpa Traditional Area, Togbe Nyamekor Glakpe V, said the bad nature of the road was a problem to the people in the area.

In November last year, he said, he led a delegation to the Jubilee House to appeal to the President for the reconstruction of the road linking the two districts.

He said the President indicated that once he was re-elected God willing, he would see to the construction of the road.

“The president is only seven months into office for his second term so we are waiting for him. He said he would do it and so we have to wait. It is a feeder road and so we appealed to him to upgrade it,” he said, adding that “we are also waiting for the appointment of a substantive district chief executive to follow up on the matter.

Togbe Glakpe, who is also the President of the Ave Council of Chiefs, said the 19 kilometre stretch was the shortest distance between the districts and that reconstructing it would go a long to facilitate business activities.

The President of the Voice of Ave Dakpa, a youth group, Mr Godwin Ayisu, said the road needed urgent attention for the people to move about without challenges.

When contacted, the Presiding Member of the  Akatsi North District Asembly, Mr Patrick Ahiabu, admitted the poor state of the road, adding that steps were being taken to grade it.

He said the award of contract for the road was done in 2015 while construction began in 2016 but unfortunately had to be abandoned with the change of government.

“The work commenced in 2016 for bituminous surfacing. About 70 to 80 per cent of the work had been done, unfortunately there was change of government,” he said.

He said at an assembly meeting about two months ago, a decision was taken to task management to impress it upon the Department of Feeder Roads to do an assessment of how best it could address the problem.

Moreover, he said, for its part, the assembly was trying to get some machinery to grade the road up to some level until the contractor came back to site.

“As an assembly you know Common Funds are not coming nowadays; about three quarters are yet to be released and so assemblies are financially handicapped so getting a contractor to do that work now is not easy because they don’t want to lock up their money,” he explained.