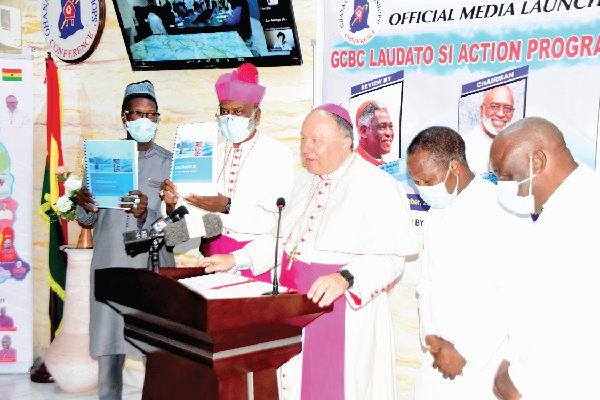 The Most Rev. Henryk Mieczyslaw Jagodzinski (middle) launching the project

The Ghana Catholic Bishops Conference (GCBC) has launched a five-year programme to tackle environmental challenges across the country.

The programme is dubbed: “Laudato Si Action Programme (LSAP)”, an Italian expression for praising God and a call to action for all Catholic dioceses and parishes across the country to plant trees, fight noise pollution and filth that has engulfed communities as part of worship.

The Apostolic Nuncio to Ghana, the Most Rev. Henryk Mieczyslaw Jagodzinski, who launched the action plan in Accra yesterday, said the programme formed part of efforts to address the looming environmental, social, economic, public health and climate change challenges that had engulfed the world, particularly developing countries.

Supported by charities of the church — Caritas Korea and Caritas Ghana — the Apostolic Nuncio said the plan would help the church in Ghana to demonstrate the integral human development concept.

He commended the GCBC for the initiative and expressed the hope that the programme would instill a new culture of spirituality, care and work in the church.

The Most Rev. Jagodzinski also advised that a system be put in place to coordinate and manage the implementation of the plan and pledged support for the success of the initiative.

The Metropolitan Archbishop of Cape Coast, the Most Rev. Charles Gabriel Palmer-Buckle, said the GCBC was already engaged in an annual tree-planting exercise, whereby a week was dedicated to planting trees around the country.

The LSAP, he said, would further strengthen and sustain the exercise by mobilising all dioceses and parishes to get actively involved.

The Archbishop also said the programme was designed to replicate the seven-year Laudato Si Action platform launched by Pope Francis in May this year.

He added that the exercise would complement the government’s Green Ghana project to plant five million trees launched in April this year.

It was in line with the project that the church also launched the “One million tree planting agenda” in May this year as part of the Laudato Si anniversary celebration, the Most Rev. Palmer-Buckle said.

For his part, the Secretary-General of the Symposium of Episcopal Conferences of Africa and Madagascar (SECAM), Father Henry Akabiam, stressed the need for action rather than rhetorics in tackling environmental challenges.

He lamented the state of drains in the country, saying “we must take action and clean the gutters because they are necessary for healthy living”.