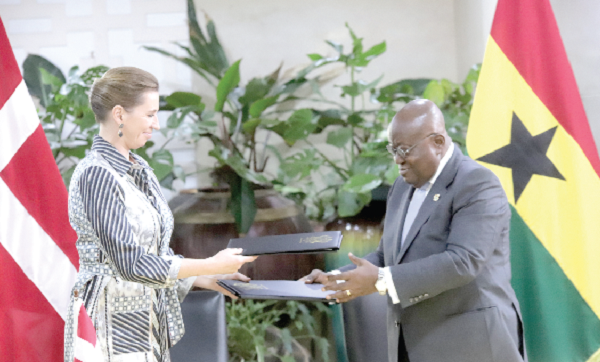 The Danish government has pledged its commitment to support the water sector in Ghana.

According to the Danish Prime Minister, Mrs Mette Frederiksen, that had become necessary to ensure sustainable water supply, which was being threatened by global warming, a phenomenon which had culminated in challenges in many areas of human life.

The Prime Minister expressed the commitment when she called on President Nana Addo Dankwa Akufo-Addo at the Jubilee House in Accra yesterday, during which they discussed bilateral relations between the two countries.

Mrs Frederiksen, who is the first Danish PM to visit Ghana, is on a two-day duty tour of the country.

She was accompanied to the Jubilee House by some Danish ministers of state, as well as the opposition leader from the Liberal Party of Denmark, Mr Jakob Ellemann-Jensen.

The visit also marked the 60th anniversary of diplomatic relations between Ghana and Denmark.

Mrs Frederiksen said the two countries had many issues of interest, including climate change, which she said was leading to an increase in poverty rates and migration from Africa.

“We need to respond to threats of climate change in both Africa and Europe by building a stronger bridge between us to tackle the emerging challenges,” she said.

On matters of radicalism and piracy in the Gulf of Guinea, she said they posed a danger to peace and harmony in the West African subregion.

She said it was for that reason that Denmark was helping to protect the ocean, adding that “maritime security is a high priority of Denmark and we are happy with our collaborations so far”.

On how to find solutions to youth unemployment, Mrs Frederiksen said it would be among issues to be discussed at a meeting of the African Union and the European Union in Brussels in February next year.

She commended the government for the efforts at containing the spread of COVID-19 in the country, saying: “I would like to congratulate you on your efforts at fighting the COVID-19 spread. You have been quite successful in your country.”

As part of her itinerary, the Danish PM will visit Frigate Danish Esbern Snare which has been deployed to the Gulf of Guinea to help improve maritime security.

President Akufo-Addo said the visit of the PM was inspiring and provided bases for the consolidation of the relationship between the two nations, which he said dated back to the 17th century.

He expressed concern over the growing menace of piracy in the Gulf of Guinea, a development that the Danish government was helping to address.

He commended the Prime Minister for “your courage in taking the decision to provide some military response for the activities of the pirates”.

The President further expressed hope that the AU-EU Brussels meeting would provide opportunity for leaders on both sides to find lasting solutions to contemporary challenges of unemployment, security, among others.