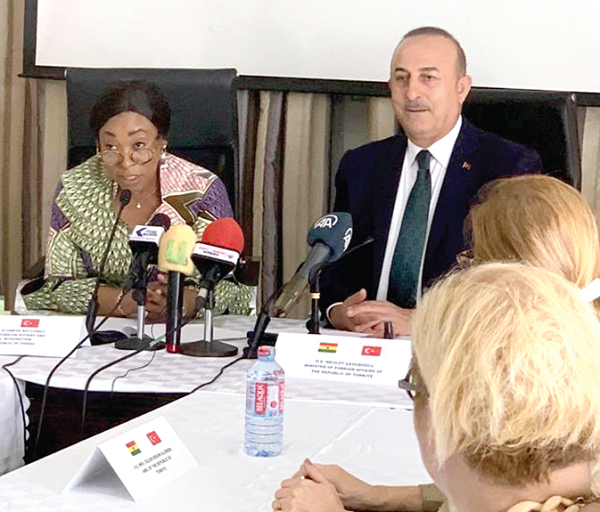 The Minister of Foreign Affairs and Regional Integration, Shirley Ayorkor Botchwey, has urged the Turkish business community to team up with its Ghanaian counterpart to take advantage of the opportunities offered by the African Continental Free Trade Area (AfCFTA).

She said such a partnership would help open up the African market to Turkish goods and services, adding that Ghana remained the most attractive destination for foreign direct investment (FDI) in Africa.

Ms Botchwey made the call during bilateral discussions with the Minister of Foreign Affairs of the Republic of Turkiye, Mevlut Cavusoglu, in Accra last Wednesday.
The discussions, held behind closed doors, were aimed at strengthening relations between Ghana and Turkiye and formed part of Mr Cavusoglu’s three-day visit to Africa.

Mr Cavusoglu began his tour from Senegal last Tuesday, where he participated in the eighth International Forum of Dakar on Peace and Security in Africa, before arriving in Accra.

He is also expected to visit Benin.


In a joint press briefing held after the discussions, Ms Botchwey said the two countries were focused on deepening economic ties and bilateral trade, as well as addressing issues of peace and security.

“We recalled the diplomatic relations between Ghana and Turkiye which date back to the early 1960s and noted the gradual growth of our bilateral relations over the years, which have translated into mutually beneficial cooperation in various fields, namely: education, defence and tourism,” she added.

She also acknowledged the exchange of various high-level visits by the leadership of the two countries, including the official visit to Ghana by the Turkish President, Recep Tayyip Erdogan, in March 2016, after a State Visit to Turkiye by former President John Dramani Mahama in 2013.

Ms Botchwey said those visits had contributed to the strengthening of the existing bonds of friendship and cooperation between the two countries at the bilateral and the multilateral levels.

She said the two countries had also recognised the need for further cooperation in new areas, such as waste management, agriculture, manufacturing, technology, oil and gas, defence, peace and security, among others.

She also stressed the need for the implementation of the various memoranda of understanding and agreements signed between the two countries, including the agreement on the Avoidance of Double Taxation.

According to the minister, that agreement, when signed, would help boost investment and trade, which she said had declined in recent years.

For his part, Mr Cavusoglu said the visit was the first by a Foreign Minister of Turkiye to Ghana.

He assured the minister and the business community in the country of his government’s commitment to encourage more Turkish businesses to invest in the Ghanaian economy.

Mr Cavusoglu said education was a vital component of the cooperation between the two countries, for which reason his government had advanced plans to offer more scholarships to Ghanaian students.

He also said Turkiye would continue to support Ghana as a non-permanent member of the UN Security Council.