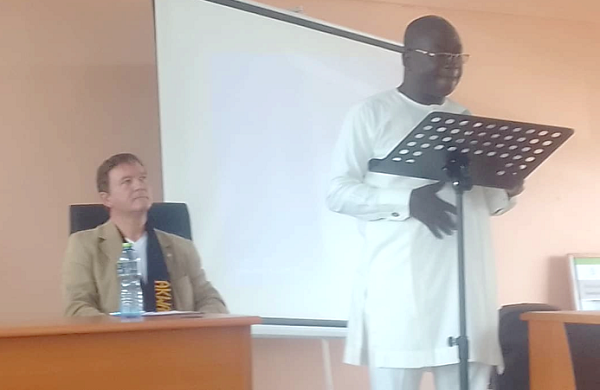 Richmond Agyenim Boateng, MCE for Kwadaso, addressing the forum. Behind him is Dirk Gene Hagelstein, the Mayor of Neu-Isenburg
30.5k Shares

As part of efforts to reduce the effect of climate change on their people, the Kwadaso Municipality in the Ashanti Region and the Neu-Isenburg city in Germany are collaborating to implement Climate Change related programmes in their respective cities.

The sister city relations will see the planting of some 40,000 trees along some principal streets and school compounds within the Kwadaso Municipality.

Already, some 10,000 trees have been planted under the partnership with 15,000 more to be planted by the end of this year.

This is to increase climate adaptation activities in both cities by 2030 and mitigate the harmful effect of climate change on the environment.

The partnership would also promote sustainable agriculture through fair trade that will enable trading of local products in Neu-Isenburg.

Speaking at a public forum last Monday, during a visit by officials of Neu-Isenburg, the Municipal Chief Executive (MCE) of the Kwadaso Municipality, Richmond Agyening Boateng, said the partnership agreement would deepen climate change adaptation and mitigation activities, as well as increase the use of solar energy in public buildings to cut down electricity cost.


According to him, the tree planting project, which formed part of the sustainable urban development planning, will include planting along the streets, greening of school yards as well as some wetlands in the community.

The Coordinator of the Climate Partnership Action, Kofi Karikari, for his part, said the partnership, which began in May 2019, was focusing on four thematic areas.

These are afforestation, renewable energies, sensitisation on sustainable management and the establishment of fair trade.

He said their partners in Germany had helped them with four boreholes with solar modules at the Edwinase Rehabilitation Centre, Methodist Technical Institute and the Denkyemuoso Community.

He added that they had also supported some schools within the municipality with personal protective equipment (PPEs) and handwashing facilities during the COVID-19 outbreak.

He said by 2025, all residents of the two sister cities would be well sensitised to know the negative impacts of climate change and identify and implement personal adaptation strategies that include behavioural change and some additional investments.

The Mayor of Neu-Isenburg, Dirk Gene Hagelstein, and Member of the Council of Neu-Icenburg, responsible for Climate Change Protection and Greening, Dirk Wolfing, affirmed their commitment to the partnership.

They said all areas afforested within the framework of the climate partnership, would be sustainably managed and protected.

They stated that the protection of the environment and its preservation would also lead to improvement in forest ecosystems and biodiversity, thereby improving the weather conditions in the communities.