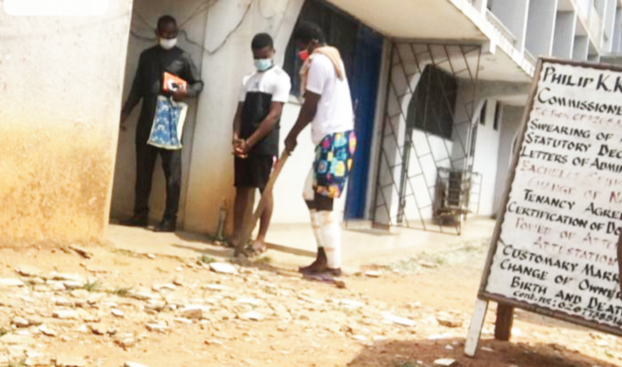 After several weeks of absence, arguments and court orders on his health condition, the second suspect in the trial of the murder of former University of Ghana Law Lecturer, Professor Emmanuel Yaw Benneh, finally made his first appearance at the Kaneshie District Court after he was discharged from the Korle-Bu Teaching Hospital in Accra.

Opambour Agya Badu Nkansah has been absent from court proceedings since October 14, 2020.

The prosecution had told the court that Nkansah was indisposed and was receiving treatment at the Police Hospital.

He was eventually sent to the Korle Bu Teaching Hospital where a surgery was performed on him.

Nkansah, who appeared before the court yesterday, was seen limping.

The suspect is facing the court on charges of conspiracy and murder together with the lead suspect, James Nana Womba, who according to the police, confessed to killing Prof. Benneh.

A third suspect, Ebenezer Kwayisi, aka Junior, is also facing charges of murder and abetment of crime.

When the case came up for hearing yesterday, the prosecutor, Inspector Ebenezer Teye-Okuffo, prayed the court to consolidate the charges of Kwayisi and Nkansah which was subsequently granted.

In the new charges, Womba (deceased) is labelled as the first accused charged with the murder of the former lecturer while Kwayisi and Nkansah are accused of abetment and labelled as second and third accused persons respectively.

However, the court held that a deceased person could not be charged and, therefore, urged the prosecution to put its house in order before the next adjourned date on February 20, 2020.

“You cannot be reading charges to someone who is dead, I do not think we can work this way so please the proper thing must be done,” the Presiding Judge, Ms Ama Adomako-Kwakye, said.

Prof. Emmanuel Yaw Benneh, a Senior Lecturer with the Faculty of Law, University of Ghana (Legon), was found dead at his residence at Adjiriganor in Accra.

The body of the younger brother of a former Vice-Chancellor of the University of Ghana, Prof. George Benneh, was discovered in his residence on Saturday, September 12, 2020, lying in a pool of blood, with his hands tied behind him with cuts all over his body.