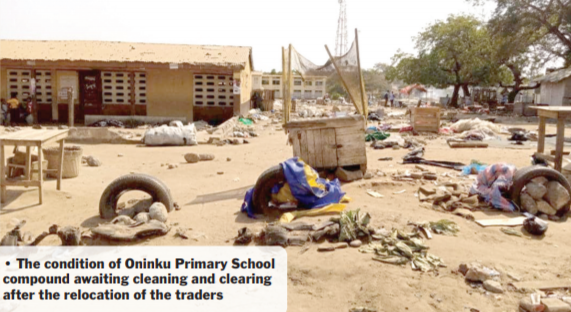 The Tema Metropolitan Assembly (TMA) has begun relocating traders operating from the compounds of some public school parks in the metropolis.

The traders are being returned to the main market in the Central Business District (CBD) of the port city as schools reopen on Monday, January 18.

Last year, as part of measures to prevent the outbreak and spread of COVID-19 in the metropolis, the TMA took steps to decongest selected markets in the city and relocated traders to some public school parks around the CBD.

During a visit to the Oninku Drive Primary School yesterday, the Daily Graphic observed that majority of the traders who sold on the school’s compound had moved their sheds, stalls and wares and had returned to the Community 1 Market.

Meanwhile, as a result of the trading activities that took place, the school’s compound and surrounding areas were engulfed in refuse.

The Public Relations Officer (PRO) of the TMA, Mr Frank Asante, said TMA would clean up schools whose compounds had become dirty to make them conducive and ready for teaching and learning.

The PRO said the relocation of the traders was being carried out in phases. Mr Asante said the assembly’s Waste Management Department, in collaboration with the Public Health Department, had put in place a plan to evacuate rubbish piled on some school compounds over the weekend.

He added that another round of fumigation of schools would be carried out by Monday.

Mr Asante said already the Metropolitan Security Task Force, Zoomlion and the Environment and Engineering departments of the assembly had been working together since last week to get the schools ready.

Checks by the Daily Graphic at the Tema Office of the Ghana Education Service (GES) showed that there had been a series of meetings among stakeholders in education in the metropolis, including heads of schools, to discuss strategies for the smooth reopening of schools.

The Public Relations Officer of the Tema Office of the GES, Mrs Ekua Obimpeh, said everything was being done to ensure that schools reopened without a hitch.

She said heads ofschools and coordinators of School Health Education Programme (SHEP), had been trained on what to do concerning COVID-19 in their schools.

According to her, personal protective materials such as hand sanitiser, liquid soap, paper towels and Veronica buckets were to be supplied to schools in the metropolis while there was an arrangement with the TMA to clear school compounds of refuse and weeds.

She said there was also an elaborate time plan for Zoomlion to fumigate the schools ahead of their reopening.