Scientists claim to have found a cure for baldness 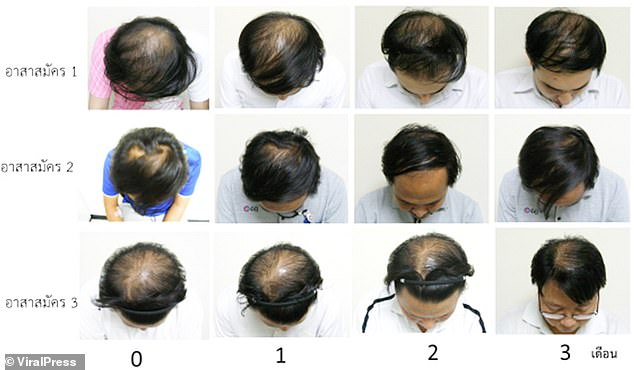 Thai researchers claim to have found an extract from mangrove trees that can cure baldness.

A small study of 50 people suffering with androgenic alopecia — the most common form of baldness — indicates that the extract halts hair loss and also promotes hair growth.

This active compound is thought to reverse hair loss by interfering with enzymes which lead to elevated hormone levels that cause baldness.

Researchers hope the findings could help people suffering from androgenetic alopecia to reverse their hair loss.

Scientists from Chulalongkorn University have been studying Avicequinon-C for years and recently won an award from the National Research Council of Thailand.

The extract has been tested on 50 male and female participants suffering from androgenic alopecia who applied the substance on their scalp every day.

The Thai researchers photographed the progress of the 50 participants regularly and saw universal visible improvements.

Professor Wanchai Deeknamkul, from the faculty of Pharmacognosy and Pharmaceutical Botany, said that aside from preventing hair loss, the substance also promotes hair growth.

"We found out it had many benefits. First, it stops the enzymes from producing hair loss hormones and second, it could also help produce the protein that stimulates hair growth," he said.

A private company has bought the patent for the technology in order to convert it into a commercial product, which may be available on the market in six months.

Professor Wanchai added: "The mangrove extract will be tested on more volunteers before it can be officially approved by Thailand's Food and Drug Administration.

"We screened more than 50 herbal extracts and more than 20 pure substances and found that Avicennia Marin extract contains the active ingredient avicequinone C, which inhibits the enzyme that produces hair loss hormones.

"Which may cause unwanted side effects especially allergic reactions and skin inflammation and affect the body's system.

"Besides, almost all of them have not been scientifically proven or researched to determine the mechanism of action of the substances used.

"In the past, we've imported synthetic drugs from foreign countries both topical and oral medication but those only showed results at 30 per cent and 48 per cent respectively.

"Furthermore, the side effects were also much more. Therefore, extracts from the Avicennia Marin plants found in Thai mangrove forests will reduce the import of those synthetic drugs. It may also be an export product that creates market value for the country as well."

Androgenic alopecia is the scientific name for age-related balding and is characterised by a receding hairline and also thinning of the hair on the scalp.

It is caused by high levels of potent hormones called androgens, including dihydrotestosterone, which are precursors to the male sex hormone testosterone.

Men in their 20s are often affected by the condition, and around half of all males suffer with it by the age of 50. Women tend to only show symptoms in their 40s and it affects fewer women than men, with around a quarter of all women afflicted.