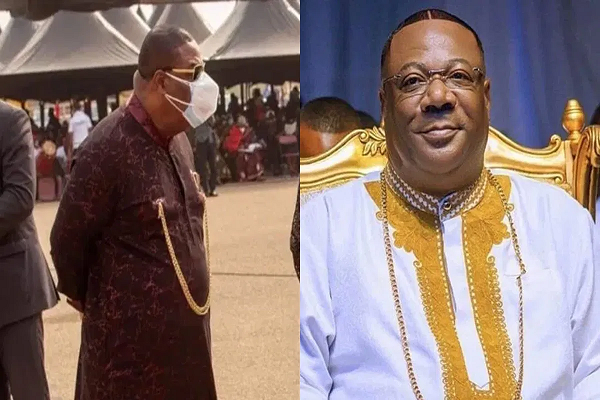 The General Overseer of Action Chapel International, Archbishop Nicholas Duncan-Williams says his decision to wear a double face mask to the funeral of the late former President Jerry John Rawlings was motivated by common sense and not faith.

The pronouncements of the popular preacher come after a picture of him in a double face mask at the funeral went viral on social media with many using it to advise persons to wear the mask.

In a sermon on Sunday (January 31, 2021), the Archbishop stated that he received many calls from his congregants who wanted to know if his decision was motivated by divine instruction.

"When I went to our late President's funeral, some people called me and said Papa, you are using two masks, are you seeing something we are not seeing? And I said no, I ain't seen nothing," he said citing Ephesians 3:20.

"Any atmosphere that is not prayer and Holy Ghost saturated, I will use my double mask and that has nothing to do with faith that just has to do with common sense.

"For the bible says, ‘Now to Him who is able to do exceedingly abundantly above all that we can imagine,’ that word imagine means ‘think’ and it is common sense so use your head".

The practice, which usually involves wearing a medical-grade mask under a more aesthetically pleasing cloth mask, has been backed by Dr Anthony Fauci, the director of the National Institute of Allergy and Infectious Diseases, who told NBC News Today that it could lower the risk of spreading the virus. “If you have a physical covering with one layer, you put another layer on, it just makes common sense that it likely would be more effective,” he said.

David Heymann, a professor of infectious disease epidemiology at London School of Hygiene & Tropical Medicine, struck a more cautious note when talking to the Guardian, saying double-masking was a valid “precautionary measure” but people needed to be reminded that masks stopped the spread of infection rather than protecting the wearer from getting the virus.

“I understand that it might give the wearer a sense of control. But people need to be reminded that the reason they are wearing the mask, or masks, is to protect others. I am sure people find it reassuring but the eyes are still exposed,” he told the Guardian. By contrast, he added, there was some growing evidence that people who wore glasses had less risk of infection.

According to Heymann, there is not a large body of evidence to prove that cloth masks are an effective method of protection. “If you are wearing a mask with an inside lining and an outside lining, so two different materials, it may be the same as a double mask of a single thickness made from two different materials.” Much depends on the fabric, and for this reason it would be very hard to make double-masking mandatory.

“The best way to protect yourself still remains physically distancing [yourself from others], and washing your hands,” Heymann says. However, a lot of the good press surrounding double-masking remains psychological. “If you want to wear two masks nobody would say that’s wrong, and I understand that’s the case if it’s a fashion statement.”

The conflation of fashion with PPE – medical grade masks with floral and silk masks by Marni and Fendi – has been a source of ire since masks were introduced last spring. As with all accessories, masks ran the risk of becoming statements of not just health, but identity.