Short Story: The story that changed people of Efikrom 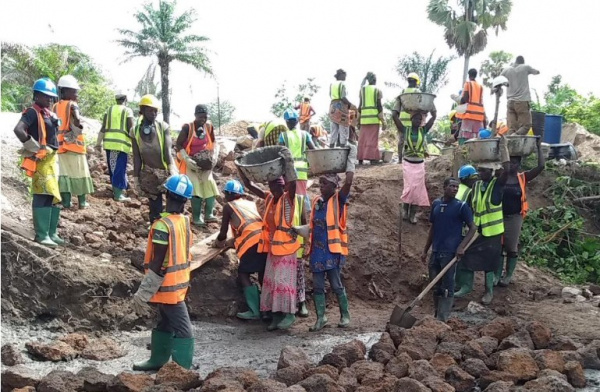 We always have to keep our surroundings clean. Follow @Graphicgh

When the Minister of Health, Mr Kwabena Agyei-Mensah, and the team of medical experts got to the village, they could not believe how dirty the village was. It was as if the whole village was a damping site. No wonder there was an epidemic.

The minister went straight to the chief’s palace and asked him to make sure the town was clean in the next few weeks because until then, their town would be called ‘Efikrom’ meaning, Dirty Town.

The medical experts also told the Chief that they will treat all the people who were sick but if the people did not change their ways, they would still be ill and might even die.

The Chief tried to protest because the new name for his village was derogatory. But he knew that what the minister   and his team of medical experts said was the truth.

He had tried to impose sanctions on his people for their unhygienic ways but to no avail. Maybe now that their town has been given an offensive name, they will change for the better.

Mr Agyei-Mensah had an SOS call to go to that village because there was an outbreak of cholera but when he got to the village he realised that the way the indigenes lived had something to do with it.

Two years after the town got its name, the people did not change their ways. Some women and children even died, but they still lived in unsanitary conditions.

The chief did not know what to do anymore. His wife, Maame Agyeiwaa assured him that she would do something about the situation.

Maame Agyeiwaa became a storyteller immediately. At night, she gathered all the people in the town and told them stories about their forefathers. The townsfolk loved the stories because they always learnt a moral lesson at the end of each tale.

At night, before the storytelling began, the children would tie the width of cloth around their waist and hold the ends in their hands. They would then run around and when the air blew, it created a colourful scene. They had a lot of fun during that time.

Before Maame Agyeiwaa tells her story she will insist that they swept the place where they sat to listen to her. “We have to keep our surroundings clean” she would always say.

She told interesting stories which the townsfolk enjoyed very much until one day she decided to advise them about their horrid habits.

This time, the title of her story was ‘s3sa wo suban’ which literally meant ‘change your habits or ways.’ Maame Agyeiwaa told them she was not happy about their behaviour in their town. She said people used gutters as bins, defecated in rivers which served as their source of drinking water, burnt refuse indiscriminately thereby polluting the air and many other ill-mannered things which affected the progress of Efikrom.

Maame Agyeiwaa told them that in order to increase productivity and make their village develop, they need to stay healthy in order to achieve that. She, therefore, asked them to change their ways and live in a clean environment. Maame Agyeiwaa said they could achieve that by weeding the bushy areas, disposing of their refuse properly in order not to attract flies to contaminate their food, and avoiding defecating in rivers and streams. She insisted that every house should have a toilet to prevent open defecation.

She told them that rubbish which was piled up everywhere was the cause of their illnesses.

Maame Agyeiwaa said: This attitude of ours must stop! We the people of Efikrom must live in sanitary conditions and practice good hygiene. It is better to fix the problem now or we will all die and our town will become a ghost town.”

These were the last words of Maame Agyeiwaa which she hoped was food for thought for them and it touched them very much. After the piece of advice, the people sang a song and dispersed to their homes.

The following day, the whole townsfolk woke up early and organised communal labour. It was surprising to note that no one sat idle, even children played their part.

Within a few weeks, the town eventually changed from a filthy environment to a clean one.

The Chief then proudly invited the Minister of Health to visit his village once again.

The minister was elated when he got there. He helped them organise a ceremony and the name of the village was changed from Efikrom to Adepakrom, meaning “a village of good things”.