Cedi’s magical rebound and how to sustain it 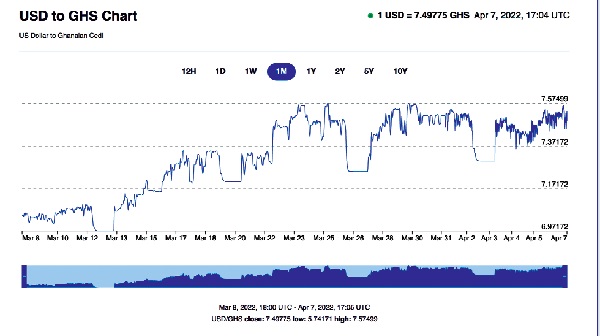 After losing more than 14 per cent of its value to the United States (US) dollar between January 1 and March 15 this year, the cedi is rewriting its own story against the world’s most used currency.

It has rediscovered its strength, steadied the pace of depreciation and intermittently appreciated against the ‘greenback’ in the two weeks that followed the government and the Bank of Ghana’s (BoG) interventions.

Similar gains have also been recorded against the euro and the British pound, strengthening hopes that the local currency has successfully shaken off the burden of depreciation that was also weighing down on the economy’s fragile recovery from the COVID-19 pandemic.

By rediscovering its feet, the cedi has also erased the ignoble record of being among the world’s worst performing currencies in whatever league table that would be prepared.

But how sustainable is the recovery?

The magical turnaround in the cedi’s fortunes is the result of moral suasion and confidence boosting rather than structural changes.

Since 2017, Ghana had become a familiar face in the Eurobond market in the first quarter of every year. It frequented the international market to raise a minimum of $1 billion to fund the budget and roll over maturing debts.

This year, the story changed. Alarmed by the country’s high debts, large deficits and an unconvincing revenue target, investors lost confidence in the country’s ability to service its debts.

As a result, they stepped up their divestment from Ghana bonds and signalled low to no interest in future debt sales from the country.

This lack of market access to Ghana for a Eurobond sale to fund the budget and bolster the cedi led to investors shifting from local currency investments to foreign ones.

It also strengthened the positions of speculators and that increased demand for foreign currencies, particularly the US dollar.

This deepened the demand for and the hoarding of the US dollar, resulting in the bouts of declines that the cedi suffered.

As the cedi lost its value to the US dollar, businesses and consumers counted their losses.

The Ghana Union of Traders (GUTA) said in March that more than 25 per cent of its capital was eroded by the depreciation.

Fuel prices also went up and that fed into prices of goods and services, resulting in inflation sustaining its upward trajectory to a peak of 15.7 per cent in February.

These effects pinched consumers from all angles.

Following increased complaints over the depreciation, the government and the BoG intervened in late March in a way that has now helped to turn the story around.

The government announced plans to raise and inject some $2 billion into the country’s reserves to help meet the demand and douse the anxiety.

The central bank also initiated a couple of measures all aimed at soaking liquidity from the economy and making cedi instruments appetising.

It raised the policy rate to 17 per cent, the highest since 2018 and increased the amount of reserve money that financial institutions must keep with the central bank.

These measures, which amounted to reversing the emergency measures introduced to cushion the financial sector and the economy in general against the effects of the COVID-19 pandemic, could lead to more than GH¢5 billion being withdrawn from circulation.

As these measures bear fruits, they will further anchor the cedi’s rebound, entrench the stability and strengthen the general economic recovery.

The measures will also curb the inflationary pressures and relieve consumers to spend.

But for how long can this last, especially given that the factors holding down this current depreciation are incapable of addressing the structural challenges that have made the cedi depreciation perennial?

The country needs credible policies to reduce the pace at which foreign companies repatriate their profits. The situation where large sums of foreign currencies are demanded in December into the first quarter needs to be addressed.

It should be possible for the BoG and the government to regulate how much goes out within these periods but in a way that does not distract the confidence that investors have in the economy.

Also, the open transaction in foreign currencies in the country must be stopped. It is not only an affront to our foreign exchange laws; it is a sore show of disrespect to the cedi, which is the symbol of Ghana’s economic might.

If locals and foreigners can sidestep the cedi to use the US dollar to pay for anything from water to houses, what regard then can they accord it?

In other countries, including nearby Nigeria, no transaction, irrespective of what it is, takes place in any currency other than the one issued by that nation.

But here, it is different. Hotels, vehicle dealers, estate developers and even supermarkets openly price their goods and services in and receive US dollars for payments.

It is even such that state institutions now advertise some of their tenders in US dollars in a manner that undermines the authority that the state has reposed in the BoG to issue and ensure the use of only the cedi as the legal tender.

It is, therefore, good that the BoG has stepped up efforts to stop the practice. But if similar actions from the central bank in the past are anything to go by, then we are only in for the show-off, not an enduring effort to stop an illegality that hurts us all.