The objectives set by the European Union (EU) and the African Union (AU) are extensive and ambitious, covering most aspects of economic and social development.

The commitment in terms of funds being made available for investments and support is massive and unrivaled in the history of the European Union.

No single country can materially influence these key areas for a continent but with teamwork, they can be managed.

We have identified the following two factors which are required for strategic autonomy for both Africa and Europe:

African (trade) data is a unique permanent asset owned by African small, medium and large businesses, communities and countries, and wherever there is a counterparty relationship, by Africa’s trading partners (counterparties).

It is important for Africa’s strategic autonomy that Data Rights are defended as an enduring (fixed) asset. Data sovereignty leads to opportunities to selectively deliver data transparency which leads to risk reduction of a trade.

The trade finance gap must be closed (i.e. the unbanked must be brought into the regulated economy) before Africa can extract full value from its data, or even to be able to access all of its trade data. 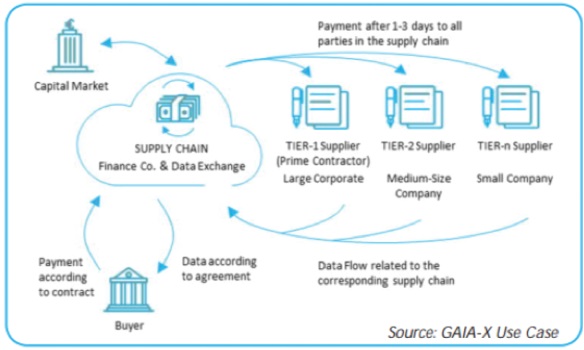 Over the nine years leading up to 2019, the average size of the trade finance gap in Africa was estimated to be USD91 billion. It decreased slowly but steadily from USD120 billion in 2011 to USD70 billion as at end-2016. But the downward trend has since reversed.

In the emerging digital economy paradigm, aggregated African/European data sets are much more valuable to Africa than silos of data.

Data sharing is a two-way street: African farmers may want to know which European consumers are willing to reward them with a higher price for their produce together with access to low-cost finance and technology solutions for transformation of their farms (Europe’s food supply chain) to carbon neutral energy.

Europe may then invest in factories (e.g. an RNA pharmaceutical plant, like the one Ghana and Germany are planning, or an electric battery plant to add value to Africa’s mineral wealth) to maximise local value add in the technologies required for Africa to achieve carbon neutrality.

All this while meeting European consumers’ Environmental, Governance and Sustainability objectives.

A standardised, pan-continental African digital bills of exchange trade finance regime such as the O-Bill and FLOW-Bill (see corresponding Use Case published by Europe’s GAIA-X Foundation in Germany) has the potential to transform ordinary trade supplier invoices into a new investible asset class. The following is an illustrative example of how that works.

A digital Bills of Exchange regime has the potential to transform ordinary trade supplier invoices into a new investible asset class for money market funds such as the $4 trillion being administered out of Dublin, Ireland.

The O-Bill and FLOW-Bill can be developed as money market instruments that can attract these idle funds to Africa and reduce African businesses’ cost of capital if they embrace secure cloud-based accounting and control systems.

The big question is, who owns the counterparty trading data and how will its value be realised? In recent times, top-down misuse of market power by governments and corporations have been used to try to seize suppliers’ data through modern-day slavery techniques such as delayed payment (“liquidity vacuum”) leading to costs of financial distress to coerce small to medium-sized suppliers to take out loans and hand over their data in the process (abuses of market power).

African data could potentially be defended by a pan-African foundation with standards jointly and numerously defined and defended by African and European institutions.

The key to success is genuine partnership to develop this joint opportunity.