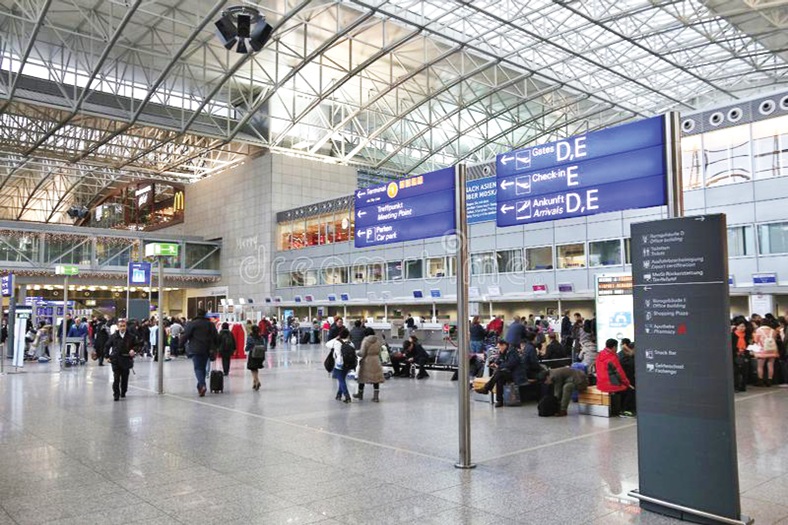 Inside the busy terminal of the Frankfurt Airport Follow @Graphicgh

Continuation from Part 1 - ‘Abrokyire abrabo’; My wahala in Germany - Part 1

Soon it was my turn and I had to be taken through the same procedure. Fortunately for me, though I did not have to remove my footwear – I was in my trainers and I was also not frisked.

I, however, had my hand luggage virtually ransacked for any possible threat and asked to remove my laptop for proper scrutiny.

And I couldn’t heave a sigh of relief yet. I still had a plane to catch before reaching my destination and was now faced with the uphill task of locating gate A13 as indicated on my itinerary at the huge airport for my connecting flight.

To my chagrin, the monitors at the airport told me a different story – they rather directed me to gate A16, which I later understood to mean I had missed my flight. And I must say I had to pay extra attention to locate gate A16 and had to go up stairways, as well as escalators, negotiate some sharp turns and do a lot of walking and sometimes running (even on the escalators) as I found others doing, in order to arrive at the designated gate on time.

All that turned out to be in vain, as I missed my scheduled flight anyway, and in the end, had to walk some kilometres – and am not exaggerating here!

At last I was at gate A16 but was told I had missed the flight. I was then asked to approach the transfer desk of the airline which was between A20 and A22 – that meant more walking and I did not have any choice. There, I met some of the passengers who were on the same flight with me from Ghana – I was not alone.

I easily located the transfer desk of Lufthansa and received help from the airline official for a new boarding pass for the next available flight – ‘Ha! Thank heavens I will get to Berlin today’, I said to myself.

Thankfully, my boarding gate was A20, just close to the transfer desk and the flight had been further delayed for about an hour. I was there at around 8:30a.m. Germany time and 7:30a.m. Ghana time.

I was then faced with the dilemma of remaining calm and patient till the flight was announced or calling my hosts in Berlin and informing them I was going to delay. I chose the former.

It was soon 9:30 and almost all passengers travelling on that flight stood up. After waiting for a while though and seeing no one moving towards the gate, I inched forward after reading a notice on a monitor close by asking all with electronic tickets to follow some steps to enter the aircraft (‘Why was no one moving’; I asked myself).

I then proceeded with the instruction and I passed with distinction. It, however, turned out to be a wrong move because the glass door which was the entry point to the entrance of the aircraft was not yet open – poor me.

Just as the electronic device leading to the exit and entrance of the aircraft allowed me access, the embarrassed ticketing official stretched out his hand and said “No, no, no, you cannot go,” in a heavy German accent, which drew a lot of laughter from the other potential passengers and he kept on watching to see if the automated door which controlled boarding would open.