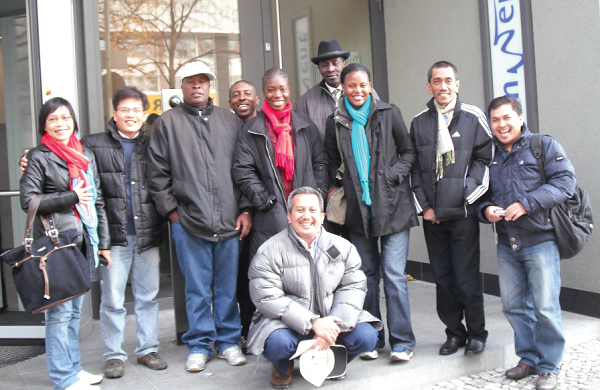 With some course mates in front of our class Follow @Graphicgh

In November 2009, I was privileged to be among 14 senior journalists from Africa and Asia to participate in a German-sponsored three-week training in Newspaper Management (courtesy InWEnt) in Berlin.

Although Ghana was not part of the eligible countries to take part in the course that year, I believed I needed to be part of that training and so I went ahead to apply and by Jove I got admitted to the amazement of the organisers and especially the coordinator of the programme, Ms Emmerich.

The day to emplane finally came and aboard Lufthansa I went to Terminal Two of the Kotoka International Airport, with mixed feelings – glad that I was finally making the trip to Berlin but a bit apprehensive as I didn’t know what to expect.

I was also going to be away from my young family of seven years which comprised my wife and two girls aged four years and a year old. It was going to be the longest period I had been away from my family.

That was my third trip to Germany – the first was aboard an inaugural flight of the now defunct Ghana Airways to Dusseldorf in 2002, the same week I was taking a bride, while the second was for a three-day environment-related conference in Berlin.

At the Arrival Hall

After a long flight we finally arrived at the Frankfurt International Airport to connect a flight to Berlin. Before we could disembark and be taken through arrival formalities, however, there were policemen at the exit of the plane who scrutinised the passports of all passengers.

Before we could alight from the bus that took us from the plane to the arrival hall, there was another scrutiny of passports by German Immigration authorities and if any suspicious travel documents were missed by the Polizei at the exit of the flight, the immigration officials were ready to mop up.

In view of the hordes of passengers arriving at the busy airport, several queues had to be formed, with passengers belonging to non EU (European Union) countries being separated from those belonging to European countries.

That was not all. On the way to the arrival hall proper, passengers were taken through a very rigid security check, which made many, including myself, miss our connecting flights.

I was fortunate though to get another connecting flight to the German capital Berlin, unlike others who were distraught and very angry because they were connecting or transiting to totally different countries and had missed their flights. They thus had to wait for several hours before the next available flight.

The security check points were a spectacle of long winding queues and anything that could trigger an alarm such as coins, wrist watches, belts, mobile phones and even shoes were removed and passed through a security device – a scanner.

This was apart from the hand luggage of passengers, jackets and laptops, with the arriving passengers themselves going through a detector – and if it was triggered they were made to go back and check what caused that and if the security officials are still not satisfied, such passengers were frisked with the aid of a security device.