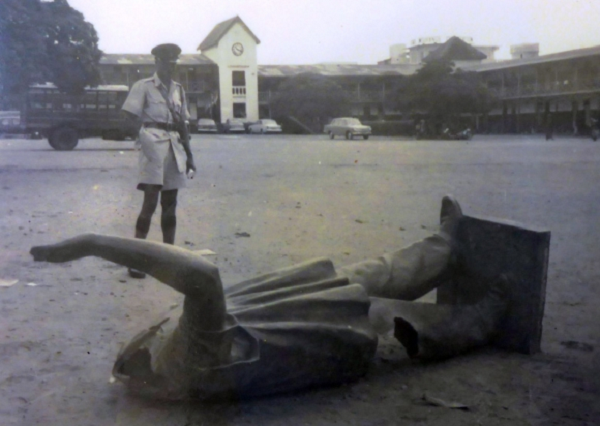 These days I hardly listen to radio. Occasionally I will flip through channels and look for plain unadulterated stories and news, occasionally music. I believe it's a tall order though. 'Unadulterated'. Too much to ask, I know.

But because of Lady Dor and Ken I still will often drift to JoyFM.

Well, this morning there was the sad story of a Ghanaian student in Ukraine. He was frightened because he had heard the tankers and the booms at midnight.

He had bought water and managed to find some biscuits in a shop where there was a scramble for bread and other groceries.

He managed to salvage the biscuits and water, but nothing else. No idea as to when they could be evacuated yet. My heart went out to him.

The talk show host made an appeal for the government to evacuate him if they cared enough.

Russia had taken Ukraine to the brink. And now they were charging in. I thought to myself... evacuate to where? To a safe haven? Where? Ghana. Oh Ghana. Oh I see. Ghana. His home country where it's peaceful?

Or where some would wish we could go back to the tankers and bombs? Where the same media calling for evacuation are taking us to the brink stirring up tensions, gloating over fighting political factions, and fighting among themselves to win the numbers game, rather than being the peacemakers?

Well, they ought to recoup their investments in the communication business but honestly, the whole affair was ironic for me.

I couldn't help reliving what we went through in Kanda in the 1960s and 70s. Coup after coup, bullets whizzing by us, stray bullet holes still visible in the ceiling in the house as we speak, armoured vehicles terrorising us day after day... I couldn't sleep for months. I still jump when a tyre goes.

Finally, I split this country. Just one night? I hear him.

I know what booming guns can do to the psyche.

On February 24, 1966 (which anniversary this year fell on a Thursday too, what coincidence) we had arrived from Tamale to participate in a school quiz competition at GTV.

We stayed over in Achimota School, but we were moved to Labone Secondary School in preparation for the quiz contest.. and my God the rattles of automatic gunfire were very much the new order.

In the evening when we moved to Broadcasting House for the contest, we knew we had moved to the eye of the storm! Stumping soldiers in heavy boots and other wares; at their intimidating best.

"Hey stop! Hey move there! Are you Young Pioneers?"

That was quite an experience.

The north became an epicentre of the so called Revolution. The then Great Buffalo soldier had flown into Tamale and to the notorious Kamina barracks and had acquiesced to be shaved by Non-Commissioned Officers(NCOs) to signify a takeover of the ranks over the Officer Corp of the security services.

With that hell broke loose on mankind because now the officers had been mortified and lost, excuse my language, their 'balls'. Hmmmm.

When the corporals and ranks came into Tamale city to get even with rivals over pretty girls and to force prices of goods down to ' control prices', who was there to complain to? The best officers had lost out on standards from the Teshie Military academy and from Sandhurst in their own interest.

So much to recount, but let's take these few examples for now!
So now comes Putin the Terrible and Ukraine. This reminds one of Hitler and World War II and our own fake domestic revolutions.

Indeed the worst multiparty democracy is miles ahead of the 'best' insurrection!!!!

The writers are a Consultant and the Chief of Lepo in the Savannah Region, respectively.