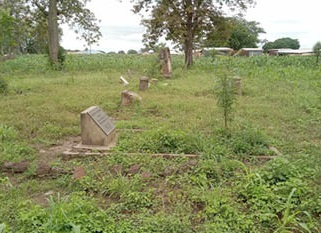 Some of the graves in the neglected German Cemetery
30.5k Shares

In the heart of Yendi, the traditional seat of the Dagbon Kingdom in the Northern Region lies some old and deteriorating tombs in a demarcated cemetery.

The cemetery is the resting place of some German colonialists who were defeated and killed by the people of Dagbon in a battle in 1896.

The German colonialists had launched an aggressive military campaign against the Dagbon Kingdom to conquer and colonise the area, but that move was fiercely resisted by the people of Dagbon.

Named the German Cemetery, the graveyard was allocated for the burial of all the German soldiers who were killed in the war to serve as a symbol of remembrance in the history of the kingdom.

Around 1890, the Dagbon Kingdom was threatened by Europeans from all directions – from the south by the Germans, from the west by the British and from the north by the French. This was to ostensibly colonise the area, but Dagbon resisted colonialism for several years.

The German forces had established their base at Adibo, a suburb of the Yendi Municipality, where they were mapping out strategies to conquer the area. 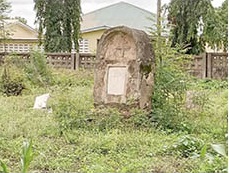 Following their resistance against foreign authority, on December 3, 1896, the people of Dagbon also known as Dagbamba, met and launched an attack on the heavily armed German Schutztruppe and Askari paramilitary police accompanying the leader of the German Forces, Lieutenant Valentin von Massow, who had been sent by the German colonial administration to quell the rebellion and was on his way to their capital at the village of Adibo.

History has it that the Dagbamba fighters suffered significant losses on the second day of the battle and after, their capital Yendi including the Gbewaa Palace which is the seat of the King of Dagbon was razed to the ground.

That enabled the German Empire to complete establishing the Togoland protectorate, which encompassed the eastern part of the Kingdom of Dagbon.

According to folklore, traces of the war are still very visible at the specific place of the battle at the Adibo community, where the Germans first came into contact with the Dagbamba forces.

Narrating the story to the Daily Graphic, the Chief Executive of the German Heritage Foundation, Sulemana Alhassan, indicated that the battle day fell on a Yendi market day and that market days that fall on Fridays were special and attended in a grand style even till date.

He said the battle at Adibo is remembered in Dagbon because they were able to conquer the Germans and freed themselves from being colonised, adding that the Ya-Na stays indoors and must not appear in public on any market day that falls on a Friday (Alizumma koofe).

Despite the interesting and nostalgic story behind the cemetery, the site which was revered in the history and tradition of Dagbon is in sorry state. The cemetery, which is lying bare in the middle of the town is being encroached upon by some private developers and individuals.

Alhaji Alhassan said the site when properly developed could become a tourist destination for local and foreign tourists, adding, “a lot of foreigners, particularly Germans visit the place to have a feel of it.

“It is very worrying that the place is being encroached upon by some residents; you can clearly see that some people are farming at the edges of it. If nothing is done about it, in the next few years I know everything will be gone,” he lamented.

He, therefore, called on authorities to consider developing the place so as to boost tourism in the area.

In a recent interview with the Daily Graphic, the Northern Regional Manager of the Ghana Tourism Authority, Hakeem Ismael, said the German Cemetery was one of the notable sites which had a great tourism potential in the region.

He said the authority had captured the site in its development plan and that it would be given the necessary attention and developed when funds were available.