Foundation hands over school block to Takyikrom, Adukrom and others 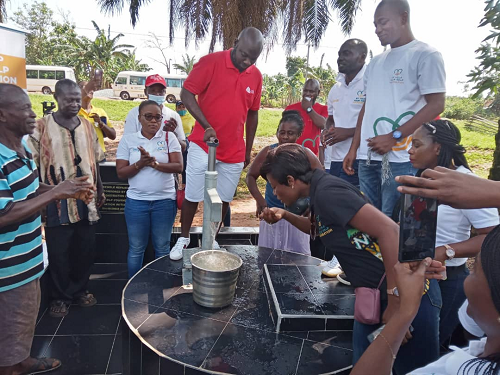 Members of MyHelp-YourHelp Foundation inaugurating a renovated borehole for the people of Adukrom
30.5k Shares

For many years, the people of Takyikrom, Adukrom, Koforikrom and its adjourning villages in the Akuapim South Municipality of the Eastern region have conducted teaching and learning activities for pupils in one church building—Elim Christian Centre.

This is because these communities do not have any school building, and therefore the only church in the place had to be turned into a school.

The school, which is up to primary five and with a population of about 300 pupils is conducted in the same church building at the same time.

The pastor of the church, Mr Martin Acolatse, is also the head teacher of the school, supported by other church leaders to run the school on a voluntary services.

Following several appeals by the communities, their appeal got the attention of MyHelp-YourHelp Foundation, a non-governmental organisation (NGO) with focus on the poor, needy and less privileged in the society.

The Headmaster of the school, Mr Acolatse speaking at the event

The Foundation on Saturday, December 19, 2020 handed over a partially completed two-unit classroom block to the community to augment the pressure and inconveniences teachers and pupils face as a result of conducting the school in the church building.

The President and Founder of the Foundation, Nicholas Cofie said the Foundation was touched to come to the aid of the community when they saw their appeals on social media.

He said having seen the plight of the communities in the area, a team from the Foundation was dispatched to area to ascertain the situation and also to conduct need assessments.

He said following their need assessments, they realised that aside from the school, the communities also lacked potable water.

Mr Cofie noted that although the Foundation had not planned to construct a school this year, due to the urgency of the situation, it had to change its plans in order to build the two-unit classroom block for the communities.

“Amazingly, the school does not only serve the children of Takyikrom, it serves children from Adukrom, Koforikrom and other settlements around,” he noted.

He said although the building had not been fully completed as planned, the Foundation would complete it but had to hand it over to the community so that when school resumes, the pupils in the “church-school” can use it in the meantime.

Mr Cofie expressed the worry that in spite of the dangers of COVID-19, all the children in the community who attended the school had to be camped in one church building.

Some members of MyHelp-YourHelp Foundation

He has, therefore, appealed to other benevolent organisations and individuals as well as other international and local NGOs to partner the Foundation to enable them reach out to the less privileged communities such as Takyikrom and Adukrom.

He said the Foundation was unable to do many projects since it only relies on the contributions of its members to undertake its projects, pointing out that since its inception about two-and-half years ago, the Foundation had undertaken more than nine projects, fed many street children, orphanages, widows and inmates at various prisons in the country.

The head teacher of the school, Mr Acolatse, praised the Foundation for the support, noting that the new classroom block would go a long way to improve teaching and learning in the community.

He appealed to the Foundation to add more classroom blocks to the school since their population keeps growing. He also appealed to other benevolent institutions to come to their aid since there were many school age children in the area who are out of school.

The Foundation with the support of JODI Construction Limited, also inaugurated a borehole for Adukrom, which will serve Adukrom, Takyikrom, Koforikrom and surrounding villages.

Mr Cofie said the borehole would provide potable water for the over 1,000 inhabitants in the area, adding that prior to the construction of the borehole, the people in the community and its adjourning villages had to rely on streams.

He said the only borehole in the community was not clean and was also high in iron content, hence the people abandoned it.

The Project Coordinator of MyHelp-YourHelp Foundation, Mr Jeff Kwashie opening the locks of the renovated borehole

The Chief of Adukrom, Odikro Opare Gyan commended Myhelp-YourHelp Foundation for the borehole, and also appealed to them to bring more development to the area.

For his part, the Administrator and Human Resource Manager for JODI Construction, Mr Isaac Kojo Nti pledged the readiness of the company to service the borehole to ensure sustained usage.

The President and Founder of MyHelp-YourHelp Foundation, Mr Nicholas Cofie briefing members of the Foundation about the borehole project

He said it was part of the company’s corporate social responsibility to serve the needs of less privileged communities.

The Foundation also used the occasion to organise a Love Feast where they served packed foods to over 1,000 people in Takyikrom, Adukrom and Koforikrom and surrounding villages. They also donated stationery to the school, sanitary pads to the women and girls in the communities and also distributed Bibles.

Many other fun activities including face painting, designing of Christmas cards, dancing competition and musical chairs were organised during the Love Feast event. They also sensitised the communities on menstrual hygiene, as well as proper handwashing practices.

The Project Coordinator of MyHelp-YourHelp Foundation, Mr Jeff Kwashie making a point about the borehole