His Lordship Most Reverend Francis Lodonu...: Oldest serving Bishop of the Catholic Church in Ghana 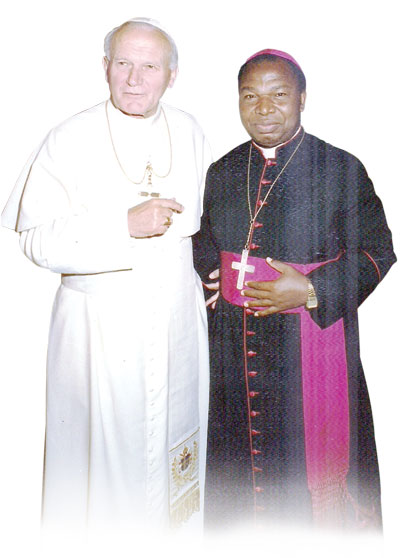 His motto    is“Facere Voluntatem Tuam”, which means, “To Do Your Will”.

It is a derivative from “Facere Voluntatem Tuam Domine” meaning “To Do Your Will Oh Lord”, captured in the book of Psalms 40:8.

And for 43-years (30 of them as a bishop), His Lordship Most Reverend Francis Kofi Anani Lodonu  has  stuck himself to this maxim—doing the will of God, serving country and bettering spirituality and harmonious relations among the brethren.

Reflecting on his work as a bishop for 40 years, Most Reverend Lodonu  says, “when I think of my 43 years as a bishop out of which 40 years have been lived as a Diocesan Bishop, I can only  say, like St. Paul in his historic second letter to the Corinthians , that “We had many years of agony and struggle but at the end of it all, we can say that in Christ we are sure to be victorious”.

His work in the volta Region

Born at Gbi-Atabu (Hohoe) in the Volta Region on  November 19,  1937, he is the 12th  and last child of Emmanuel Koku Allala-Lodonu of Gbi-Atabu and Akosua Lodonu (née Tenge) of Alavanyo Agorxoe.

Teacher Catechist Emmanuel Lodonu, as his father was known, was one of the catechists who held the fort when the German missionaries were deported. He was awarded the Papal Medal “Bene Merente” in 1955.

Following his consecration on  June 29,  1973 as an Auxiliary Bishop, he had to travel round the whole diocese visiting and strengthening the Catholics and administering the sacraments as Bishop Konings was sick and could not travel round.

From 1973 to 1995, he was virtually in charge of the Catholic Church in the Volta Region, from Keta to Kete Krachi.

It was in 1976, that his predecessor, Bishop Konings left for good and Bishop Lodonu was enthroned as the Bishop of Keta-Ho in Ho in the presence of all the faithful, the then Head of State, Col. I. K. Acheampong and almost all the ministers of state.  on  August  15,1976.

The Bishop of Keta-Ho at that time was living at Kpando in Bishop Herman College.

In 1982, Bishop Lodonu called a meeting of the great chiefs of the Volta Region and under the direction of Fathers Jacob Hevi and Francis Amuh, began a serious study into African traditional practices . Thus, he established the Faith and Culture Commission.

He convened the first-ever Synod for the diocese of Ho from September 7- 17 , 2000 on the theme: “Effective Evangelisation for Living Fully, the Christian calling in the Third Millennium: “What Shall We Do Brothers?” (Acts 3:37)”. The acts promulgated from the synod became the blueprint for pastoral work after 2002. 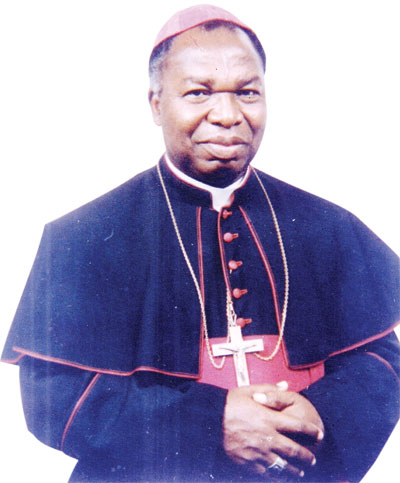 Ho has now become the headquarters of the Catholic Church with a spacious Catholic Secretariat.

There is now a well-functioning social centre behind the Catholic Secretariat where regional and national conferences – religious as well as civic ones take place.

The social centre has now grown to become Bishop Konings’ guest house, restaurant and Conference Centre.  The 10th Plenary Assembly of the Association of Episcopal Conferences of Anglophone (English Speaking) West Africa (AECAWA) was held at this social centre in 2004.

There is also a retreat centre at Sokode near Ho. The centre has evolved to become a centre of learning known as Bishop Holland Memorial Pastoral and Formation Centre. This was formally inaugurated by the Papal Nuncio, Most Rev. Leon B. Kalenga on  October 7, 2010.

There is a large convent for Sisters, with a large private basic boarding school (Mater Ecclesiae School), a clinic (Mater Ecclesiae Clinic) and a centre for handicapped children, for rehabilitation and massage.

In 1989, Bishop Lodonu  founded the Volta Friars, which has developed into a Diocesan Religious Institute of Active and Contemplative Religious Men known as Franciscan Friars of  Africa.

There is a great centre in Alavanyo-Abehenease, built above a waterfall and meant for spiritual renewal and prayers where many Christians go for retreat and prayers. It is one of the centres of the Foyer de Charité headquartered in France.

He oversaw the  development of great Catholic institutions such as Bishop Herman College of which he is an old boy (BHOBU), and OLA Senior High School in Ho.

In 1978, Bishop Lodonu  was appointed a member of a committee set up by the government to help bring peace between the Pekis and Awudomes in the Volta Region.

Since 1980, he has been involved in striving to settle the dispute between the Alavanyos and the Nkonyas. 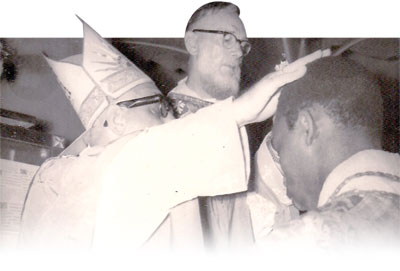 In June, 2004,  Bishop Lodonu was appointed officially to bring peace between the Nkonyas and the Alavanyos as Vice Chairman of the mediation committee.

Through the efforts of the Catholic Diocesan Peace Building and Conflict Transformation Centre, the mediation committee received the necessary materials and technical support enabling the communities of Nkonya and Alavanyo to reach a level of peace until February 2013 when events changed the peaceful situation to what it is now.

The Most Rev. Francis Kofi Anani Lodonu was awarded the “Order of the Volta” (companion) by the Government of Ghana on July 1, 2006 for distinguishing himself in the Christian religion.
Bishop Lodonu was appointed by the President of Ghana through the Ministry of the Interior as a member of the Ghana National Peace Council, from  July  27, 2007 to November 2011.

He dutifully served on this council, travelled the length and breadth of Ghana to give lectures or to help resolve conflict wherever the council was moving to.

It was this council that was succeeded by the National Peace Council with a new legislative instrument Act 818 of 16th May 2011 and gazetted on May 20, 2011.

He sent several priests, religious and lay men and women abroad to study and specialise in theological, human and physical sciences.

Many of these people are in the academia, schools and colleges, health institutions, the military and in parishes.

On  November 19, 2012 at his 75th birthday, his biological family outdoored the Bishop Lodonu Educational Endowment Fund to solicit funds to help needy children in education after his great desire as bishop.

Bishop Francis Lodonu is 75 years and must commence his retirement at that compulsory age for a Bishop of the Catholic Church.

Some thoughts on national politics

Most Reverend Lodonu shared some thoughts on national politics saying “I witnessed the major political developments of the country as a bishop”. He remembers Dr Kwame Nkrumah and all that he did as a youngman.

Nkrumah, he observed, had plans although individualistic that worked but believes that after Nkrumah, no other president comes close to his  achievements.

“We have been reduced to ad-hoc planning. We must have a holistic plan that captures the blueprint of all planning and development needs as well as action plans” he stressed.
Ghana, for him, was a relatively small country within the sub-region and that it should be possible for much to be achieved with proper planning.


Bishop reminisces the era of Colonel Kutu Acheampong’s regime together with others such as Anthony Selormey and Colonel Agbo.

“There was a lot of motivation in the country at the time when we had ‘Operation Feed Yourself’ and others. That was the period too when we enjoyed high cocoa price but the spending trend or just extravagance led us to problems”, he lamented.

This situation, he said, dovetailed into the bigger problem of national planning noting that “I am looking forward to the day when a political party will come and say ‘I will not borrow but only rely on internally generated fund’ stressing that issue of national borrowing for him had become too much.

He recollects that when Dr Abrefa Busia came, he had the plan to construct the Eastern Corridor Road Project with a projection to construct 10 to 20 miles each year till it reached Tamale and he could have done that without borrowing but we would still have had a solid road. 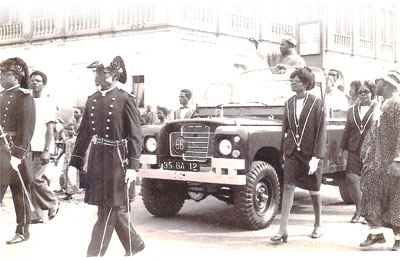 “I sometimes feel that the revolution by Rawlings could have been a great thing if he had come with real planned changes but as it were, Ghanaians did not give correct advice to the leader.

Rawlings depended on people who did not help him enough. Much was done but not much was done for the Volta Region. Our roads continue to be in a deplorable state”, he cried.

For him, the issue of proper national planning has been his lamentation for all these years because “Ghana has the brain and the wealth”.

“When we begin to hear of our expenditure and the judgment debt saga, then you remain very cold and you ask yourself that if that money had been used well would the country not have moved forward?” he queried.

But on the whole, he believes there is light at the end of the tunnel citing the outspoken institutions and individuals in the country who are committed to openly fighting corruption.

“Let’s continue to pray for the eradication of corruption and the restoration of honesty. With proper planning, we can channel our resources into productive ventures that will speed up national development”, he craved.

Bishop Lodonu is advocating a national think-tank that will brainstorm on the future direction of the country and that, according to him, was what 40 years of service had taught him.