Tamale, the Northern Regional capital, can easily be described as the motor city of Ghana.

Like Ouagadougou in Burkina Faso, the streets of this sprawling northern city are dominated by motorcycles of various kinds more than any other city in Ghana.

Statistics at the Driver Vehicle and Licensing Authority (DVLA) has revealed that in the last 10 years, averagely 8000 motorbikes have been registered annually in Tamale.

Majority of these bikes remain in Tamale, while some are taken to other parts of the region.

Standing by the Sakasaka-hospital road on a working day, one can count as many as 100 motorcycles every 15 minutes. At the main traffic intersections, about 20 motorbikes mostly lead the cars and off they go when the light turns green as if they are in a convoy.

In fact, motorbikes have become part and parcel of households in Tamale just as donkeys are to rural homes. Apart from helping to carry people from place to place, motorbikes are used to carry goods.

As expected, business people are cashing in on the increasing demand for motorbikes and as a result, motor garages have sprung up at various corners of the metropolis. 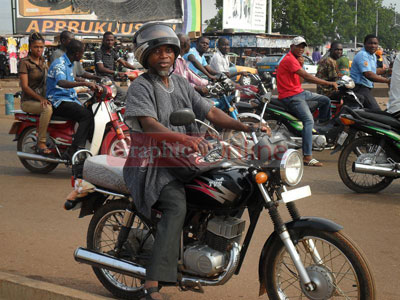 Over the last 10 years, the DVLA in Tamale has registered averagely 8000 motorbikes each year.

Last year, the DVLA in Tamale registered over 10,500 motorcycles.


From January to June this year, the DVLA in Tamale has already registered 5,486 motorcycles.

Every month, the Motor Traffic and Transport Unit (MTTU) in Tamale records at least eight accidents that involves motorcycles and many of them are fatal.

A number of residents the Daily Graphic spoke to are of the opinion that motorcycles dominate the streets of Tamale because they are the preferred means of transport for many average earners.

“It is more economical than using a taxi because when you fuel it, you can use it for several days,” said Francis Npong, a student of Tamale Polytechnic.

For Mr Muniru Issah, a mechanic, it was less expensive to maintain a motorcycle than a car.

“You need less than GH¢10 cedis to service a motor, especially if all of its parts are still intact,” Issah said. side the economic reasons, many interviewees also indicated that motorcycles made transportation faster and easier.

“When you have a motorbike, you can go anywhere in town at anytime,” said Ms Jemilatu Musah, a national service person.

She further indicated that motorbikes were very popular in Tamale due to limitations with public transport.

“There are several areas that taxis do not get to and so without a motorbike, movement becomes problematic,” she noted.

The four largest motorcycle markets in the world are all in Asia: China, India, Indonesia, and Vietnam, according to Wikipedia.

In Tamale today, the most popular motorcycle is an average-sized motorcycle that has been nicknamed ‘mapouka’.

It is not due to its durability or capacity, but because of its beauty and convenience. It comes in various designs and lovely colours, such as green, brown, black, white, yellow, orange and violet, depending on the brand.

Just as young women want to be seen in the latest hairstyle or fashionable clothing, so do a lot of people in Tamale want to be identified with this latest automobile.

“A lot of young women simply love this bike and so if you have one, it enhances your chances of winning the heart of a woman,” said a teacher, Abdul-Dahim Salifu.

He said while men with average income purchased ‘mapouka’ to show off to their prospective girlfriends, the affluent men went to the extent of buying the bikes for their girlfriends and wives.