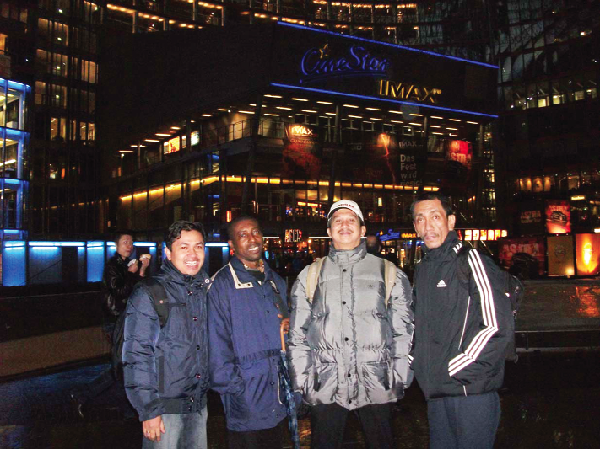 Colleagues and I after the movie
30.5k Shares

In the last installment published on July 23, I recounted a farewell dinner in the heart of the Berlin City at the Aapka, an Indian restaurant, after which coursemates moved to the Clarchens Ballhaus at WeinmeisterstraBe to try out some ballroom dancing, chacha and walzer, among others, all of which indicated that we were close to the end of our stay in Berlin. Read on.

Before I recount the happenings on the last day though, there are other events preceding that day that are worth sharing.

Only five of us course participants opted to see a film at a German film theatre on Friday, November 13, 2009, at the cost of €3 when we were offered that opportunity.

So, although we were all very tired we just decided to take advantage of the opportunity to savour German cinema. At the end of the day we were not disappointed but we nearly got bored with the many adverts that preceded the film titled “The Informant”.

The interior and exterior of the theatre hall were all nice but there were not many patrons to watch the movie, even though it was a new one, which made me realise that it was not only in Ghana that the appetite for watching movies outside the home had gone down.

Please do not ask me for the cast of the film because I am not very good at that since I am not really a movie person, although I enjoy good movies and can easily tell a good one from a bad one.

Suffice me to say though that the major star in the movie is the same person that starred in the popular movie “The Bon Identity” and he turned out to be such a professional liar in the new movie that all of us course participants at the theatre gave up on him.

The movie is essentially about a senior employee of a big firm who turned out to be the one giving away vital information to the CIA about the criminal activities of the firm and so became an informant to the security agency.

He indeed succeeded in causing the arrest of the top hierarchy of the firm, although it was found out at the end that he lied all through so he could become the next boss of the company.

It was as if he was not born to tell the truth...but wait till I tell you the wahala I had to go through, struggling to stay awake when the movie was just half way through.

Come and see me dozing off at some point when my eyelids gradually got heavy and I could no more keep them open – oh what a life!

But trust me when I say I still managed to follow the story line till the end of the movie and was relieved to learn at the end of the over two-hour movie that I wasn’t the only one who dozed off along the line – I at least had one compatriot.

Afterwards, we boarded an underground train at Potsdamer Platz to Sudkreuz, connected another train to Hermannstraße, then boarded our bus, the M44, to Zimmererweg to take a well-deserved rest.

It was thus no wonder that I woke up late after a hectic week of lectures and extracurricular activities such as the film show the night before, although most of us had planned to visit the shopping centre at 10 a.m. German time, which is the time the shopping mall opened on Saturdays.

In view of that, when a colleague from Tanzania, whom we affectionately called Papa Lucas called me around that agreed time, I was not ready – I was simply taking it easy, since I reasoned there was more time at my disposal. I finally left my apartment alone to the mall at 11 a.m.

And who says shopping is easy, especially when you have a very tight budget? When I arrived I first combed the length, but maybe excluding the breadth of the shopping mall, as I figured some shops were simply no go areas for me because of their very expensive items.

That really did not help matters much because I was still exhausted by the time I had finished going round the shops of my choice and making a mental note of the items I figured were affordable.

You can imagine the trouble – no; wahala I had to go through, just so I could get some good buys, or if you like, some tokens for family and few friends that could be covered by my rather scanty purse.

To make matters even worse for me, getting to the individual shops and making some choices was also a different ball game all together.