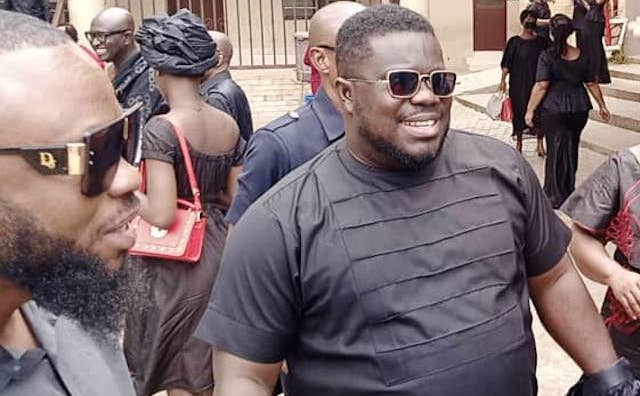 A FORMER president of the Musicians Union of Ghana, (MUSIGA) Bice Osei Kuffour aka Obour has praised the late AB Crentsil for his contribution to music in Ghana.

Kuffour known in showbiz circles as Obour, who is currently Managing Director of Ghana Post made a duet album with the late AB Crentsil titled The Best of the Lifes in 2007.

Speaking to the Graphic Showbiz during the one week observation of the passing of AB Crentsil which was held at the Community 8 Park at Tema, Obour said if there was one musician whom he spent quality time with, it was AB Crentsil.

The late veteran Ghanaian Highlife musician known for several hits songs such as Devil, Atia, Juliana, I Go Pay You Tomorrow, Papa Samo, Ayen among other songs died at The Bank Hospital, Accra, on Wednesday, July13, 2022.

According to Obour, the collaboration with AB Crentsil to come out with The Best of the Lifes in 2007, saw Highlife coming together with Hiplife to produce a masterpiece.

"It was not just an album but a project which came with a nationwide tour and a tour of five continents." he said

Obour disclosed that for about three years, he was on the streets of Ghana and in the air with AB Crentsil promoting the project.

Obour said the late legend had so much influence on him (Obour) adding that the deceased was such a bubbly man and very creative resulting in AB Crentsil making music with everything around him and was always ready to help.

He said the late AB Crentsil appreciated rap and always tagged along during recording and performance sessions.

"When you are rapping, he wants to dance with you, cheer you on and after it all, he will talk to you and let you learn some of the experiences he went through."

He shared with me his life experiences not just in music but also about marriage and family, the need to save money etc. He was a great inspirer and mentor," Obour added.

"For me, since my father passed, AB Crentsil has been more like the pillar I go to periodically to talk to. Now that he is no more, it is going to be a difficult time for me." Obour said.

While eulogising the legend for his contribution to music, Obour prayed the good Lord will strengthen the people most closest to AB Crentsil especially his wife and children and fill the void that has been created.

The late Highlife musician, AB Crentsil will be buried on November 5, 2022 in Ewoyaa, near Saltpond in the Central Region