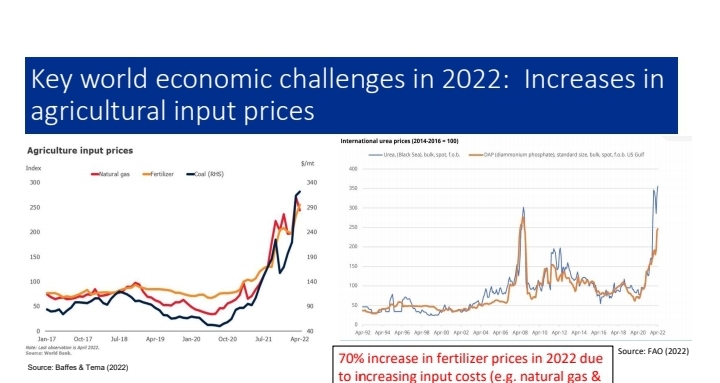 The Institute of Statistical, Social and Economic Research (ISSER) has joined calls for Ghana to begin local production of fertiliser to help boost farming and ensure food security.

It said looking at the supply side challenges faced by global producers, the country should begin to think about using its gas to produce some of these fertilisers locally.

ISSER made the call in its report on the Mid-Year Review of the Budget Statement and Economic Policy for 2022, presented by the Minister of Finance, Ken Ofori-Atta, on July 25, 2022 to Parliament.

In the review, the government outlined immediate measures to enable households and farmers to cope and support stable food supply in the country.

The measures include the placement of a temporary ban on grain (maize, rice, and soya) exports and promotion of the use of organic fertilisers and cultivation of crops such as roots which require less fertiliser.

According to the World Bank (WB), increase in agriculture inputs prices was a key world economic challenge in 2022.

It said that there was a 70 per cent increase in fertiliser prices this year due to increasing input costs (such as natural gas and coal prices), reduction in production and trade disruptions.

Again, the WB forecasts wheat prices to increase by over 40 per cent this year because Ukraine is an important supplier.

Some stakeholders in the sector, namely the General Agricultural Workers’ Union (GAWU), Peasant Farmers Association of Ghana (PFAG) and the Chamber of Agribusiness, Ghana (CAG), have often expressed worry about fertiliser price hikes on the world market with direct effect on Ghana because it relies 100 per cent on imported fertiliser to boost food production.

Consequently, the groups suggest that it is important that the government looks at the possibility of attracting foreign investors for the possible production of the commodity locally, especially with the abundance of natural gas in the country.

“Fortunately, we are blessed with the availability of natural gas, which shortage has led some manufacturing companies in the West to shut down their plants.

“Although it is capital intensive, it behoves the government to scout for potential investors with deep pockets to invest in such a project.

“It is only when fertiliser is produced locally that we can guarantee price control and adequate supply to our farmers to ensure food sufficiency and food security,” the General Secretary of GAWU, Edward Kareweh, said in a recent interview.

According to ISSER, despite significant productivity growth in major staples in the last decade or so, the food security situation in Ghana continued to deteriorate.

Citing data from the West African food security monitor, it said that the food security situation in Ghana, just like other ECOWAS member states, had worsened.

“Presently, there are more than 22 per cent of Ghanaians who are either under pressure or in crises when it comes to meeting their food needs. The primary driver of this situation is the price shocks coming from the costs of transporting products to the market and rapidly changing input prices or limited supply of inputs,” it said.

The report said one way to address food price volatility and its implication on food security was to hold optimal buffer stocks.

It explained that its current estimates in terms of how much buffer of grains Ghana should hold per time, was about 800,000 tonnes if the cost of maintaining these stocks was 10 per cent of the value of the grain.

“The question is; how much stocks do we currently have? Given that we could not make available stocks this year to stabilise prices, it may suggest that our current stocks are quite low,” it said.

“Significant investments have been made by the government and the private sector in warehousing infrastructure, but the challenge is inadequate surpluses and the availability of resources to buy and keep even if the surplus was available,” it said.