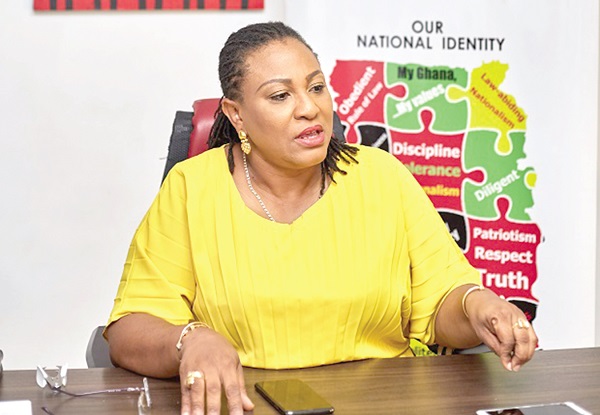 An end-line survey data released by the National Commission for Civic Education (NCCE) has identified that citizens’ awareness and knowledge of where to report cases of corruption played important roles in minimising corruption.

The report, which examined the ‘Public Opinion on the State of Corruption, Public Accountability and Environmental Governance in Ghana’, also revealed that having confidence and trust that a whistle-blower would not be exposed was equally important.

The NCCE in 2017 signed a memorandum of understanding with the European Union (EU) and its subsidiary organisations to undertake a five-year programme known as the Accountability, Rule of Law and Anti-Corruption Programme (ARAP).

The ARAP is an initiative that seeks to promote good governance and support national reforms to enhance accountability and strengthen anti-corruption efforts across the country.

A baseline study that explored the knowledge and perspectives on the state of corruption, public accountability and environmental governance in Ghana was undertaken by the commission in the same year.

The end-line survey report assessed the progress achieved on key indicators of ARAP which were utilised at the baseline.

It said comparatively, the proportion of respondents who knew where to report cases of corruption was marginally lower for the end-line survey (63.7 per cent) than for the baseline (64.7 per cent).

“Most people believe the police station is the first port of call to report cases of corruption.

Corruption has been identified as a key obstacle to sustainable development with diverse effects on economies and the lives of citizens.

About nine out of 10 respondents (86.8 per cent) ranked corruption in Ghana high and very high.

At the baseline stage, a slightly higher percentage was recorded (91.4 per cent), indicating that although marginally, there was a slight improvement in the perceived level of corruption in Ghana from the perspective of the citizenry.

Across the regions, respondents in the Greater Accra Region (98.0 per cent at end-line, 94.8 per cent at baseline) were more likely to rank corruption high and very high, followed by the Ashanti Region (80.1 per cent end-line, 90.2 per cent baseline).

Among the reasons cited for the ranking included observed bribery before service delivery in state institutions, frequent media reportage on corruption in various institutions and extortion of money by security personnel.

For the end-line survey, 46.4 per cent of the respondents in the study cited greed and selfishness as the main reason why people engaged in acts of corruption. Desire to get rich quickly and satisfaction of a dire need followed with 30.2 per cent and 7.4 per cent respectively.

For the end-line survey, 20.4 per cent of respondents reported having been personally involved in one corruptible act or another.

In terms of age, both studies found that persons below age 45 stood a higher chance of engaging in corruptible acts than other age groups.

Bribery was mentioned as the most corruptible act majority of the respondents (60.8 per cent) in the end-line had ever engaged in. It was followed by favouritism (13.3 per cent) and paying for administration charges (10.7 per cent).

On institutions that respondents believed were more prone to corruptible acts, for both studies, the Police Service topped the list, with the Judicial Service coming second.

They were found to be more prone because they provided essential services and hence took advantage of desperate customers. Others also believed the activities of those institutions were not monitored.