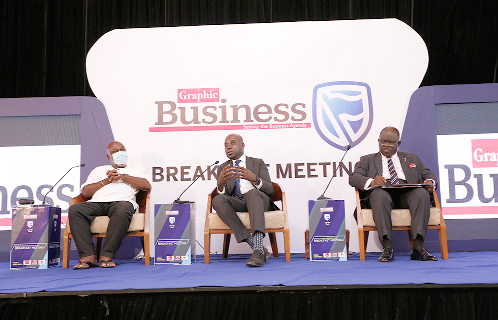 He said COVID-19 had made everyone aware of the reality of a new digital ecosystem, something which the traditional media must quickly adapt.

Speaking at the Graphic Business/ Stanbic Bank breakfast meeting, he said between 1960 right through to the 1980s, Africa’s media infrastructure was driven by military rule and one-party state and was so until 1996 when the continent began the process of liberalising the media environment.

Fast forward to 2021, he said Africa’s media within the context of the analogue regime was now dependent on advertising revenues.

He said Africa’s media had, however, failed to evolve and develop to take full advantage of the advertising regime.

Quoting a report by PwC, he said out of the $600 billion global advertising cake in 2020, Africa’s share of the cake was only one per cent.

“In every media environment that advertising is suppressed, you will get bad journalism. This means that journalists will not have enough money to do their work,” he stated.

In an era of falling advertising revenues, he said there was little effort on the part of media owners to give to advertisers what they wanted.

“So most of the money goes to billboards. The telcos also came along and they have programmatic, algorithms and tools which pinpoint lifestyles which advertisers want.

“So fundamentally the industry has moved on and print and analogue broadcast is dead but we have the opportunity to reset,” he stated.

Mr Twumasi also noted that a reality had been made that the global north was controlling the evolution of the media.

“Facebook is the largest publisher of media at the moment so when it comes to any type of news in Ghana, Facebook reports that first and Twitter follows then the traditional print media will follow.

“New York Times had to quickly change to digital to retain profitability and most of the media outlets, including the Washington Post, had to be absolved by Amazon. So when you look at what is happening in the global north, what is happening here is going to get worse,” he explained.

He pointed out that new internet societies were forming.

The CEO also noted that fundamentally, Africa’s digital ecosystem was estimated to reach $180 billion in 2025 and $712 billion by 2050.

“We have a huge opportunity to reset and make the digital economy a very powerful income generator to the country and drive the agenda of the Africa Continental Free Trade Area (AfCFTA),” he said.

A digital Marketing and Communication expert, Mr Stephen N Boadi, also speaking at the breakfast meeting, said traditional media would not die as a result of digital media.

He said traditional media outlets, who had been able to integrate the digital aspect into their business, would continue to be relevant.

“It is also about the value you are giving to people. If we refuse to grow and don’t adapt to new trends, we will die.

“So it depends on how the traditional media embrace technology to give more value to customers,” he said.

Mr Boadi also commended the media for educating and informing the public during the peak of the COVID-19 pandemic.

“They sometimes did this at the risk of even losing revenues and must be commended,” he stated.

He said there was, however, some disruption by some digital media outlets who used the platform to publish fake and false information.

“Because we are in a digital world, everybody is a publisher and it’s easy to put out content so we had people publishing all sorts of  content that disrupted what was going on.”

He, however, advised the mainstream media to insist on adherence to the ethics of the profession and not fall for the pressure from social media.

“The trend is that people are going to social media to find out news and discover brands but we will always go back to traditional media to validate what we see on social media,” he stated.