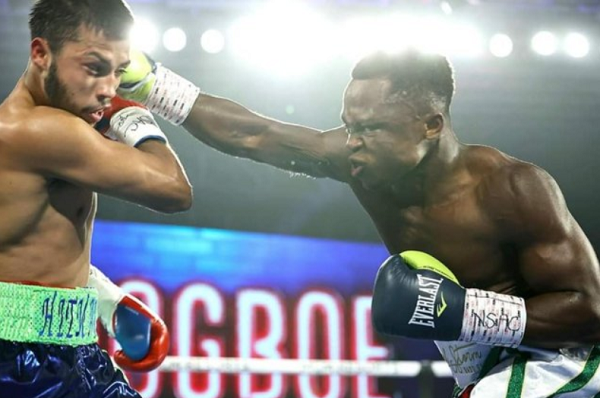 Dogboe’s win was the first fight ESPN televised as part of a card headlined by junior lightweights Oscar Valdez and Jayson Velez.

Dogboe improved to 21-2, recorded his 15th knockout and ended a two-bout losing streak in his first fight in 14 months.

Referee Russell Mora stopped their scheduled featherweight eight-rounder at 2:25 of the eighth because he felt Avalos was taking too much punishment.

The 25-year-old Dogboe, born in Accra, Ghana, fought for the first time since Emanuel Navarrete stopped him in the 12th round of their WBO junior featherweight championship rematch in May 2019. Mexico’s Navarrete upset Dogboe by unanimous decision in their 12-rounder five months earlier to win that title from him.

Dogboe also made his debut Tuesday night with a new trainer, Barry Hunter, in his corner.

After Avalos had some success in the seventh round, Dogboe drilled Avalos with a right uppercut and a left hook with just under two minutes to go in the eighth and final round.

Dogboe backed Avalos into the ropes with a short, left hook later in the eighth. A sweeping right hand by Dogboe several seconds later caused Mora to step in and stop the action with 35 seconds to go in the eighth round.

Avalos mostly tried to keep his distance from Dogboe during the sixth round. Dogboe caught up to him and landed a hard right hook just before the sixth round concluded.

Dogboe’s straight right rocked Avalos with 1:12 remaining in the fifth round. He clipped Avalos with a left hook a few seconds later.

Mora deducted a point from Dogboe for a low blow with 41 seconds to go in the fifth round. Dogboe hadn’t been warned for hitting Avalos low before Mora took away a point.

Dogboe connected with several flush right hands in the final minute of a one-sided fourth round. He also connected with multiple lefts to Avalos’ body during those three minutes.

Dogboe backed up Avalos after landing a right hand with about 1:10 left in the third round. Fighting from a southpaw stance, Dogboe blasted Avalos with a right hook just prior to the end of the third round.

Dogboe jabbed consistently and controlled much of the second round, but Avalos nailed the former champion with an overhand right and a left hook in the final few seconds of that round.

Avalos landed a left hook to the body and then a straight right up top with one minute to go in the opening round. A chopping right hand by Dogboe landed to the side of Avalos’ head with 21 seconds remaining in the first round.

Watch the full fight below: