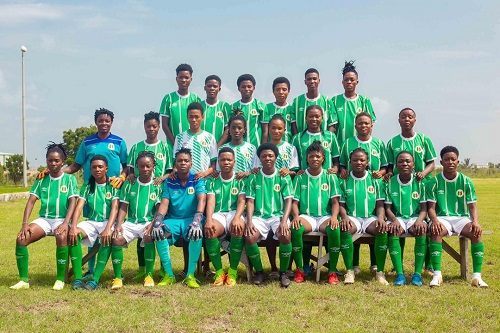 HASAACAS Ladies are determined to maintain their unbeaten run at the ongoing CAF Women’s Champions League when they play Egypt’s Wadi Delga in their final group game today.

It is a must-win for the hosts if they are to progress in the competition, while a draw or a slim margin loss could see the Ghanaians through to the semi-finals.
Well aware of the stakes, Hasaacas Ladies are determined to maintain their winning form as they intend to top their group.

In their opening two games, the West Africa Football Union (WAFU) Zone B and Ghana’s double champions proved their quality, scoring six goals while conceding one to sit pretty on top of the Group A log.

The Egyptians started well with a 3-1 win over AS Mande of Mali but were complacent in the second game, losing 0-3 to Equatorial Guinea’s Malabo Kings. They now need  to win this final game and hope that the Malians hold the Equatorial Guineans in the other group game to give them a lifeline.

Head Coach Yussif Basigi in an interview with the Daily Graphic said his team was peaking and would not want to break the rhythm.
“Most people would be expecting us to ease the tempo because we have already qualified, but far from that. We don’t want any surprises because the Egyptians will come out to play, knowing that their progression in this competition depends on the outcome of this game.

“We also want to maintain our unbeaten record and remain on top so we will go all out to claim the points,” Basigi, who is seeking to make history as the first coach to win the novelty competition, said.

So far, the players he has started in the previous games have been consistent, with Evelyn Badu and Perpetual Agyekum getting the goals, the former having four and the latter two.

This afternoon, though he may decide to give some of the reserved players an opportunity, the strategy, he insists, would not change.
In the other Group A match, Malabo Kings, with three points, will push for a win and qualification against AS Mande, who will only play for pride, unless they could overturn their five-goal deficit.