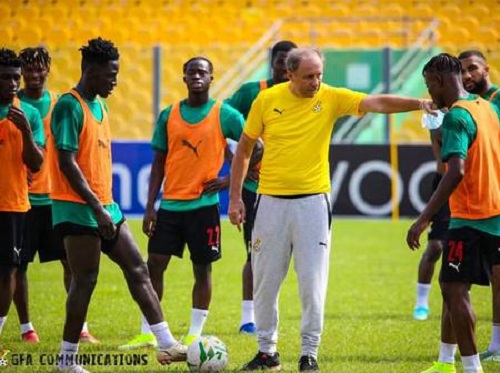 Coach Milovan Rajevac has been forced to tinker with his squad following the injury of his dependable midfielder, Thomas Partey, as he leads the Black Stars against Ethiopia in the penultimate FIFA World Cup qualifier in Johannesburg at 1 p.m. today.

Partey has been influential in Ghana’s campaign, having contributed two out of the five goals scored so far and the huge gap created means the Serbian trainer needs to find a suitable replacement who can get the job done.

Under the circumstance, veteran Wakaso Mubarak could be deployed in that role, especially after scoring the match winner against the Walias of Ethiopia in the first leg at the Cape Coast Stadium on September 3. The 67-year-old Coach Rajevac will expect Wakaso to replicate the same form when given the opportunity.

Yesterday, the team had their final training at the match venue without injured Columbus Crew centre-back Jonathan Mensah and debutante Felix Afena Gyan.

However, morale in camp remains high, with the rest of the players ready to lift high the flag of Ghana.

Mundial target
Today’s game is crucial to Ghana’s World Cup chances and after steering the Stars to their second successive Mundial qualification at South Africa 2010, the Serbian is bent on responding to the roll call in Qatar next year and also make history as the first coach to qualify Ghana twice to the tournament.

Despite their determination to win the game, the Ghanaians have to be mindful of the fact that the Ethiopians have nothing to lose as their current three points in Group G put them out of contention.

Their only motivation is to salvage some pride, and that will force them to approach today’s game differently, with Coach Wubetu Abate relying on such players as Amanuel Yohaness, Shimeles Bekele and Abubakar Nase to spoil Ghana’s party at the Orlando Stadium.

Underdogs
Even though the East Africans have never been a threat to the Black Stars, except in 1996 when they won 2-0 in an international friendly in Addis Ababa, they might want to change the script against the more determined Black Stars squad.

Having transformed the Stars from a goal-shy entity into an efficient, all-attacking and free-scoring side, Coach Rajevac is expected to stick to his typical game plan to secure the maximum points in enemy territory.