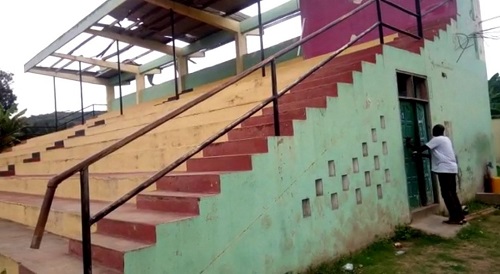 The deplorable state of the stands of the Akosombo stadium

A section of football enthusiasts within and outside Akosombo in the Asuogyaman District in the Eastern Region have appealed to the government to refurbish the Akosombo Stadium to enliven the social atmosphere of the natives and also unearth sporting talents.

They also called for the handing over of the stadium to the Ghana Football Association (GFA) to ensure the effective utilisation of the facility.

Speaking to the Daily Graphic at Akosombo over such a wasteful investment, Mr Kwaku Oduro Duah, a sports administrator, said while the government was constructing new stadia and rehabilitating others in other parts of the country, it would only be appropriate to include the Akosombo Stadium to save it from total collapse.

The Akosombo Stadium as it stands today has been virtually subdued by weeds, while the roofing has been torn apart, making it dangerous to access the facility.

The management of Akosombo Textiles Limited (ATL) constructed the stadium as part of its Corporate Social Responsibility (CSR) to the people of Akosombo and its environs but it has been left to deteriorate by the Volta River Authority (VRA) which is supposed to supervise it.
Random interviews conducted by the Daily Graphic saw some sports-loving fans blaming the VRA for having monopoly over everything in Akosombo.

Adding their voices to the stadium neglect, some concerned women also complained about the loss of business activities during football matches due to the deterioration of the stadium. They claimed that the stadium was not meant for football matches only but also for public gatherings such as the Independence Anniversary parade, athletics and other social functions.

A number of football administrators made frantic efforts in the past to maintain the stadium but such moves ended on the rocks as VRA often demanded money before giving out the stadium for use.

According to some fans of the defunct Akotex FC, the Akosombo Stadium plan was to be international standard with floodlights for both local and international engagements.

The original plan included a tennis court, table tennis and boxing halls, as well as an athletics oval and the football pitch, but regrettably the project was abandoned, thus allowing encroachers to take over part of the land.

The Akosombo Stadium was built as the home ground of defunct Akotex Football Club during the Premier League days.

The late Paramount Chief of Akwamu Traditional Area, Odeneho Kwafo Akoto II, a former chairman of the Presidential Commission during Dr Kwame Nkrumah’s regime, offered ATL 47 acres of land for the establishment of the factory in 1967.