Prez appeals for end to chieftaincy disputes in Akuapem 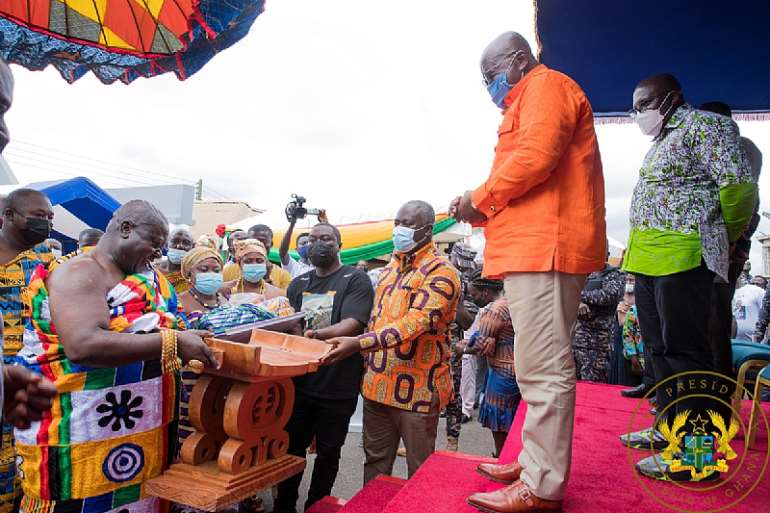 President Nana Addo Dankwa Akufo-Addo has appealed to the chiefs and people of the Akuapem Traditional Area in the Eastern Region to do the needful to end the prevailing chieftaincy disputes in the area.

He also urged them to take a cue from the experience of the Ga Mantse, King Tackie Tawiah in the Greater Accra Region, which managed to resolve a protracted chieftaincy dispute amicably.

He expressed his dissatisfaction about the manner in which the situation in the area was not the best and advised all dissatisfied parties to employ diplomacy to settle their differences once.

The President said this when he paid courtesy calls on the Aburihene, Otoobour Djan Kwasi at his palace at Aburi and the Akuapemhene, Oseadeeyo Kwasi Akufo Ababio.

President Nana Akufo-Addo mentioned specifically Dagbon and Gas, as some of the chieftaincy areas which needed to turn to Okuapeman for lessons.

He said the government had also initiated a number of projects in the Shai-Osudoku District, of which the Osudoku Traditional Area was a beneficiary.

Otoobour Djan Kwasi made a passionate appeal to the President to pump money into the Aburi Botanical Gardens to immediately revive it.

The Akuapemhene, Oseadeeyo Kwasi Akufo Ababio said the chiefs and people were in support of his coming to continue to do more to improve the living conditions of the people.

At Akropong, in the Eastern Region, the President commissioned a Fabriek Shoe Factory which produces 800 quality shoes per day for the security services, students, as well as casual workers among others, it also created employment opportunities for 50 people.

He later inaugurated the Okere District Assembly Hall Complex at Okere, a newly created district to aid in effective administration.