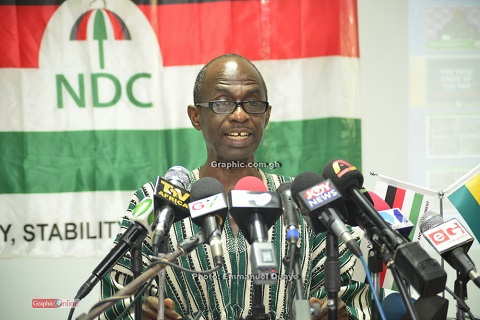 The General Secretary of the NDC, Johnson Asiedu Nketiah

The opposition National Democratic Congress (NDC) has petitioned the Inspector General of Police (IGP) to investigate the alleged illegal printing of excess presidential ballot papers in the 2020 general elections.

The petition dated November 5, 2021, and signed by the General Secretary of the NDC, Johnson Asiedu Nketiah also wants persons found culpable after the probe to be prosecuted.

“I write on behalf of the National Democratic Congress to petition your office to institute criminal investigations into and prosecute persons culpable in the illegal printing of over one million excess presidential ballots meant for the Ashanti Region at Innolink Printing press, one of the seven security printing firms contracted by the Electoral Commission to print election materials for the 2020 presidential and parliamentary elections,” the petition stated.

The petition claims that the Electoral Commission (EC) broke away from the usual practice and failed to provide the statistics on the quantities of ballots to be printed for each constituency at each printing press to the NDC before the commencement of the printing exercise whereas the printing houses and the General Secretary of the New Patriotic Party confirmed that they had received the ballot statistics.

The party said although it appeared as though all waste materials for Innolink Printing Press had been destroyed by November 25, 2020, its agents were stunned to discover boxes of ballot papers concealed in one of the offices of the printing company after a problem with the ballots of the Afigya Kwabre South Constituency.

"That when the printed ballots at Innolink were transported to Ashanti Region on 22nd November 2020, it was discovered that there was a problem with the ballots of Afigya Kwabre South Constituency and therefore the ballot booklets were returned for reprinting," the petition states.

"That upon their return to Innolink Printing Press on 25th November, to supervise the reprinting of the ballot papers for the said constituency, our agents discovered, to their dismay, boxes of ballot papers concealed in one of the offices.

"That when our agents raised alarm and caused the boxes to be opened, they noticed that they contained presidential ballot papers for Ashanti Region which were over one million in quantity".

"That alarmed by what they saw, they filmed the ballots and enquired from the supervisors what those ballots were meant for".

The petition said when the NDC's agents confronted the supervisors at Innolink, they gave all manner of incoherent answers and the ECs officials also denied any knowledge of the excess ballots.

The petition further disclosed that although the said ballot papers were destroyed at Old Fadama on November 27, 2020, in the presence of officers from the Ghana Police Service, National Investigation Bureau, Innolink, NDC party agents and the media, the party has reason to believe that some of the excess ballot papers were sent to the Ashanti Region before the discovery.

The party in another petition dated November 5, 2021, also asked the IGP for an update on investigations on electoral malpractices and violence that characterized the election and voter registration exercise.

“As you aware, the 2020 Presidential and Parliamentary elections were characterised by various acts of violence before, during, and after elections. Indeed, for the first time in Ghana’s electoral history, at least one person lost his life during voter registration and as many eight others lost their lives in incidents of gun violence involving security personnel with several others sustaining various degrees of injuries.

“We contend that the failure on the part of the police to deal decisively with such heinous crimes portends clear dangers for Ghana’s democracy that all well-meaning Ghanaians and development partners should be concerned about. It is for this reason that we request that the Ghana Police Service provides us updates on the state of investigation and prosecution.”