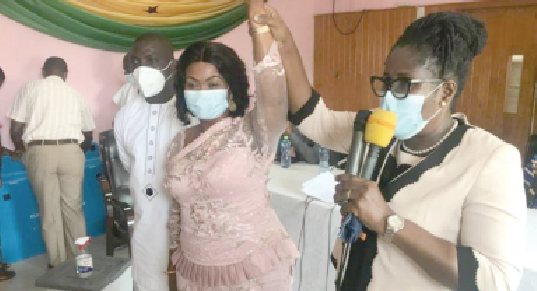 The incumbent Western Regional representative on the Council of State, Mrs Eunice Jacqueline Buah, retained her position after securing 24 votes in yesterday’s re-run.

During the elections last Friday, February 12, 2021, to elect regional representatives to the Council of State, the Western Region elections ended in a tie as Madam Buah and another aspirant, Nana Bonkyi Akomea, polled 14 votes each.

The elections were, therefore, rescheduled for yesterday during which Mrs Buah polled 24 votes to win the seat as against Nana Akomea’s four votes.

This brings to 15 the number of regions that have elected their representatives to the Council of State.

What remains to be conducted is the Bono East Region as a result of a court injunction by some assembly members in the Atebubu-Amantin and Kintampo North Districts.

Mrs Buah thanked the people for the trust and promised to work in the interest of everyone in the Western Region.

One of the candidates, Mr Dramani Kwabena, 45, an Environmental Health Analyst, later withdrew his candidature.

Mrs Buah’s election brings to 15 the number of persons elected to represent the regions on the Council of State, the constitutional body charged with a mandate to advise the President.

They will join the President’s 11 appointees and four ex officio members to form the council to advise the President in his second four-year tenure.