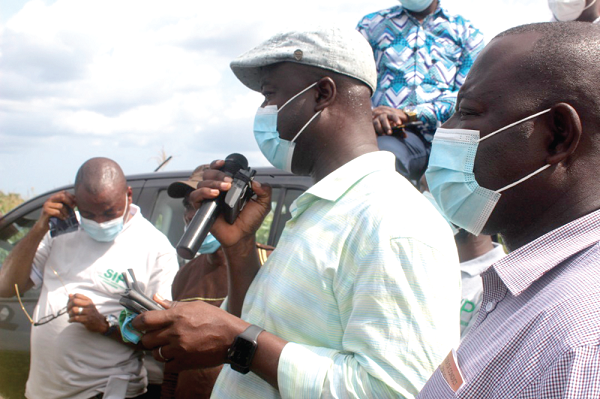 The Parliamentary Select Committee on Food, Agriculture and Cocoa Affairs has called for retooling of the National Food Buffer Stock Company (NAFCO) to help boost its storage capacity and enhance food security in the country.

The committee observed that with a sustainable funding source and adequate storage facilities, NAFCO would be well positioned to buy produce of local farmers and also address the growing influx of foreigners in the Ghanaian market which had resulted in the recent price hikes.

The Deputy Ranking Member of the Committee and Member of Parliament for Wa East, Dr Godfred Seidu Jasaw, made the call in an interview with the media at Sanzee in the Mion District of the Northern Region during a working visit to the area.

The visit was to enable members of the committee appreciate the operations of the various government interventions to improve the agricultural sector and to achieve the Planting for Food and Jobs programme.

Members of the committee visited two farms in the Mion District and Tamale Metropolis owned by Cudjoe Abimash Farms which had received support from the Savannah Zones Agricultural Productivity Improvement Project (SAPIP) and the Savannah Investment Programme (SIP) to increase its production to about 1000 hectares of maize and soya bean, and thousands of birds and livestock.

The SAPIP project, an intervention by the government, which began in 2018 and would end next year, supports farmers in the Northern Savannah Ecological Zone (NSEZ) with inputs, technical services in terms of land preparation, using appropriate machinery and market linkages, among other things, to increase production of maize and soya bean.

SIP is also an intervention which supports animal production in the NSEZ by supplying poultry birds to farmers and helping to feed them for the first two weeks and loaning ruminants to farmers to boost production.

Dr Jasaw called on poultry farmers to consider working closely with commercial farmers and the Ministry of Food and Agriculture so that they could produce poultry feed at affordable prices to increase their production.

For his part, the Chairman of the Committee and Member of Parliament for Abirem, Mr John Osei Frimpong, commended the government for initiating the SAPIP and SIP projects, saying the projects were contributing significantly to boosting food production.

He said given the gains made so far, the committee would engage with government through the Ministry of Food and Agriculture to ensure the possible extension of the projects to help transform agriculture in Savannah Ecological Zone.

The National Project Coordinator of SAPIP/SIP, Mr Felix Darimaani, in a presentation to members of the committee, indicated that about 118 commercial farmers and a number of smallholder farmers were benefiting from the projects.

He, therefore, appealed to the government and various funding agencies to support the extension of the projects to sustain the gains made so far.