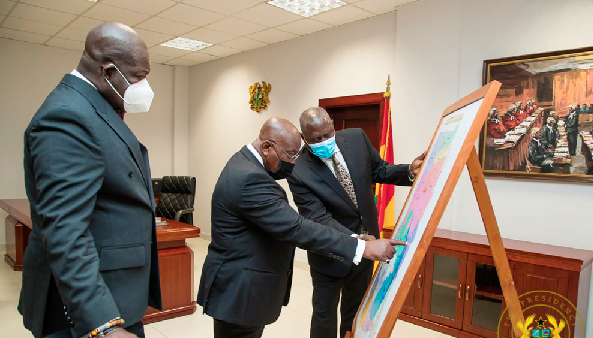 President Nana Addo Dankwa Akufo-Addo has said the conduct of free, fair and transparent elections with indisputable results forms a good basis for strengthening cohesion among the Ghanaian citizenry and preventing needless contentions.

He explained that since 1992, the conduct of the country’s elections had evolved significantly, and that the current multiplicity of media organisations and the power of social media, transparent ballot boxes, decentralised tallying and tabulation, and voter verification had engendered increasing trust and confidence by the citizenry in the process of electing their leaders.

Together with the compilation of a new voters register ahead of the December 2020 elections, the President said: “all of these enhanced processes have strengthened the cohesion of the nation. They have also repudiated as fallacious the contentions expressed at various times of our history that democratic governance would breed instability and ethnic conflict”.

At the annual conference of the Ghana Bar Association (GBA) held virtually yesterday, the President said there had been those who went as far as stating that democracy was inherently alien to the country’s culture and social make-up.

“The continuing success of the Fourth Republic provides the most effective response to this unfortunate viewpoint,” he said.

President Akufo-Addo, however, noted that Ghanaians could not and must not take the good fortune for granted, and urged all candidates, voters, and citizens to conduct themselves in a manner that kept the unity as one people, irrespective of ethnic, religious, gender or political differences and affiliations.

“Ghana has rightly earned a reputation as the pacesetter in democratic governance on the continent, a reputation I am determined to uphold and, indeed, enhance prior to, during, and after the December 7 elections,” he said.

The Attorney-General and Minister of Justice, Ms. Gloria Akuffo, called on stakeholders in the electoral process to commit to reducing the rate of election-related violence as the country got ready for the general election.

She said such acts were not healthy for the country, as they threatened national cohesion.

“We must work harder as a people to reduce the spate of election-related violence, negative advertising, the poisonous rhetoric of condemnation of political opponents, the denigration of otherwise cherished political icons and the verbal demonisation and criminalisation of whole categories of persons,” she said.

Speaking on: “Enhancing national cohesion: The essence of free, fair and responsible electoral process”, the Attorney-General observed that election-related violence was one of the most serious threats to national cohesion and human security.

She said the by-elections in Asankragua, Gomoa, Akwatia, Atiwa, and Ayawaso West Wuogon were poor records of the country’s political history which must be abhorred by all as the country approached the December 7 polls.

Conversely, Ms. Akuffo posited, when elections were debased through voter apathy, voter suppression, deliberate disenfranchisement, undue influence, and voter intimidation, rigging, resort to opaque voting methods, irregularities and malpractice, and even recourse to violence, “the popular will is repressed and this could trigger a dangerous spiral of political instability, violent insurgency and downright national disintegration and socio-economic decay”.

She further urged stakeholders to strengthen and nurture the public trust in the Electoral Commission (EC).

To that end, she urged political parties to use their platforms as a tool for the mobilisation of ideas to develop the country and strengthen national cohesion, adding: “The parties must be truly national in the sense that they must be para-ethnic, instead of parochial; all-embracing, rather than sectional, and solidly present in every constituency as required by law.”

“We have a charge to keep, a nation to build and God to glorify. Our charge is to keep the nation together and to prosper the Republic. These obligations are among the foremost duties of both government and the citizenry,” the Minister of Justice declared.

The Chief Justice, Justice Kwasi Anin Yeboah, urged judges to expedite the adjudication of electoral conflicts ahead of the December 7 elections.

That, he said, would boost the integrity of the outcome of the general election, adding that the Judiciary had positioned itself to ensure that the rule of law remained paramount in the country.

“Safeguarding electoral integrity lies in a major resolution of complaints and appeals with minimum delays. There is no doubt that the slow pace of adjudication of electoral disputes is anathema to the Constitution, which mandates the smooth operation of Ghana’s democratic culture,” he said.

The President of the GBA, Mr. Anthony Forson Jnr, called on journalists to be circumspect in their reportage of political activities in order to promote peace and unity in the country.

He said the GBA would host a colloquium for journalists, where seasoned media practitioners would share their experiences to help ensure an insult-free political season.