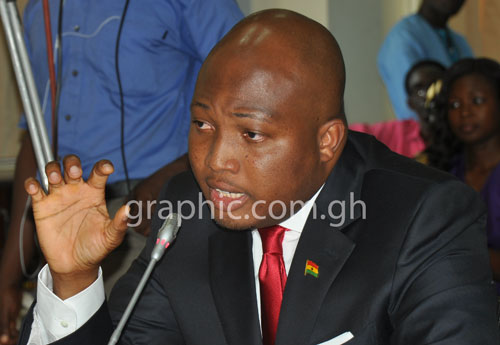 A deputy Minister-designate for Education, Mr Samuel Okudzeto Ablakwa, yesterday denied allegations that he owned a number of filling stations in Accra, a fleet of petrol tanker vehicles and a house in Texas in the United States of America.

Answering questions when he appeared before the Appointments Committee of Parliament to be vetted, the former Deputy Minister of  Information said the rumour had "caused me pain, since they are baseless".

He described the rumours as mischievous and attempts by people to cast aspersions on his hard- won reputation.

"I am not into oil business and I leave those who have concocted the rumours to their conscience and into the hands of God," he said.

Mr Ablakwa explained, however, that his uncle, one Mr Ablakwa who had been in the oil business for the past 17 years, is the owner of the Allied Oil Company and wondered whether his detractors were linking him to his uncle’s company.


Answering another question on the ongoing West Africa Senior Secondary Certificate Examinations (WASSCE) in which candidates from the four-years and three-years durations are taking part, the nominee said adequate preparations had been made to ensure that those who qualified gained admission to the public universities.

He explained that Parliament had approved funds for the Ghana Education Trust Fund (GETFund) to complete all ongoing projects in the public universities to ensure that admissions were increased.

On his pronouncement that the government created 1.6 million jobs when he was a Deputy Minister of Information, 'Mr Ablakwa said he gave that fact because the figure was a collation from reports submitted by the various ministries, departments and agencies.

He quoted from various documents during ex-President Kufuor's regime in which figures from the various agencies were tabulated to show the number of jobs that administration created within specific periods.

Mr Ablakwa said his figure was disputed because his opponents said it was not done by the Statistical Service, and explained that since the service had not been doing that there was the need for a body to be established to collate the number of jobs created in the country.

On whether the government should take a second look at the reversion to the three-year senior high school  education, the nominees  said education was not about duration but quality and content.

"Even if you kept students in school for seven years without quality teaching and content, motivation of teachers, we cannot be successful,"  he said, adding that rather than the holding of conferences to decide the duration of the SHS system, such resources should be used to improve on quality.

Commenting on the strike by the University Teachers Association of Ghana (UTAG), GNAT and NAGRAT, Mr Ablakwa called for incentives such as promotion and the provision of tools to enhance the work of teachers.

Even though he declined to comment on the issues that had resulted in the strikes, he suggested that housing schemes were established while teachers were supported to acquire cars to motivate them to give their best.

On the Freedom of Information Bill, he said a lot of advocacy had taken place, and that all stakeholders had come to a conclusion that there was the need for it to be passed to ensure transparency and accountability in governance.

When he took his turn, the Deputy Minister of Justice and Attorney-General-designate said there was no need for the Constitution to be amended to enable the government to separate the Attorney-General's Department from the Ministry of Justice.

Touching on  why the government lost a number of cases  recently, the nominee explained that "it is not all cases that as a lawyer you have to win".

He said there was also attention on the Attorney-General because of the high-profile cases that  he handled.

Dr Ayine explained that  there was pressure always on the Attorney General to  take cases to court when the department  was not prepared to do so.

In addition, the nominee explained that there was a high attrition rate at the A-G’s office and called for measures to be put in place to motivate lawyers to accept employment as State Attorneys.

Dwelling on the Economic Partnership Agreement (EPA) between the European Union (EU) and African, Pacific and Caribbean Countries, Dr Anyine said a study had shown that Ghana would lose  about $20 million annually should we sign the agreement.

He said even though there were numerous advantages to be got from such an agreement, we should do so after some safety measures had been put in place.

Dr Anyine explained that issues such as dumping and subsidisation should be dealt with and documented before Ghana signed the EPA in order to protect its indigenous industries.

On the delay in administering  justice, the nominee asked the police to do a thorough investigation before sending a case to court to avoid the numerous adjournments that had characterised the country's courts.

On the current strike by the workers of the Judiciary, Dr Anyine called on workers who provided essential services to respect provisions of the Labour Act which prohibited them from embarking on strike.

When he took his turn, a Deputy Minister of Finance and Economic Planning-designate, Mr Cassiel Ato Forson, told the committee that over- expenditure was not a bad practice depending on how such an amount was spent.

Commenting on why in spite of the low inflation figures, interest rate kept on rising, the nominee stated that even though the two were inter-related, interest rate had its own peculiarities.

He explained that access to capital by the banks was also a factor to the banks in the determination of interest rates.

Mr Forson, who is  the Member of  Parliament for Ejumako Enyan Essiam in the Central Region, added that the banks were  in for profit, and would pass on every cost in the acquisition of capital to those who borrowed from them.

He called for measures to ensure that the government borrowed less domestically.

Mr Forson suggested that the government adopted a system whereby the financing of capital projects were separated from the country's budget, since between $1.2 billion and S1.5 billion needed annually for the next 10 years to finance the country's infrastructure deficit could not be financed through the budget.

On ghost names on payrolls, the Deputy Finance Minister-designate said the government had begun an exercise through the use of biometric data to ensure that the practice was eliminated from the system.

He revealed that through the system, a total of GH¢58 million was saved between July and September last year, and that he would assist the sector minister to ensure that the exercise was carried to its logical conclusion.

On whether Ghana was broke or not, he said it was not true that the Minister of Finance, Mr Seth Terkper, made such a categorical statement.

Mr Forson explained that Ghana was in capable hands and would never return to the HIPC days.

Exposing the recent newspaper reports that he was duped by a lady, he stated that even though a company that he had an interest in was involved in a deal with the lady, he was not personally duped.

The 31-year-old young man who has been nominated as a deputy minister for the Ministry of information and Media a Relations said he would assist  the  sector minister to ensure that there was free flow of information and feed back to the government.

He stated that though the perception that the NDC was hostile to the media was not true, efforts should be made to deepen the government's relationship with the media.

Mr Kwakye Ofosu dispelled perceptions that he was arrogant, and stated that he was someone who was strict and principled.

"I have always stuck to the truth and principles irrespective of the consequences, and it is unfortunate that in living up to my ideals, my opponents think that I am arrogant”.

On strikes by labour unions, he maintained that workers should respect the provisions of the Labour Act.

The Deputy Minister-designate for Lands and Natural Resources told the committee that women who ventured into politics ought to be strong.

She said there was the need for more women to be in politics to serve as models for up-and- coming women.

Ms Asamoah said it was proper for the government to return acquired lands that were not being used for the purpose for which they were acquired back to their original owners.

She explained that it should, however, be done with a land utilisation plan to ensure that such lands were put to proper use.

The committee will continue its vetting of deputy ministers today, and the following nominees are expected to appear before it.