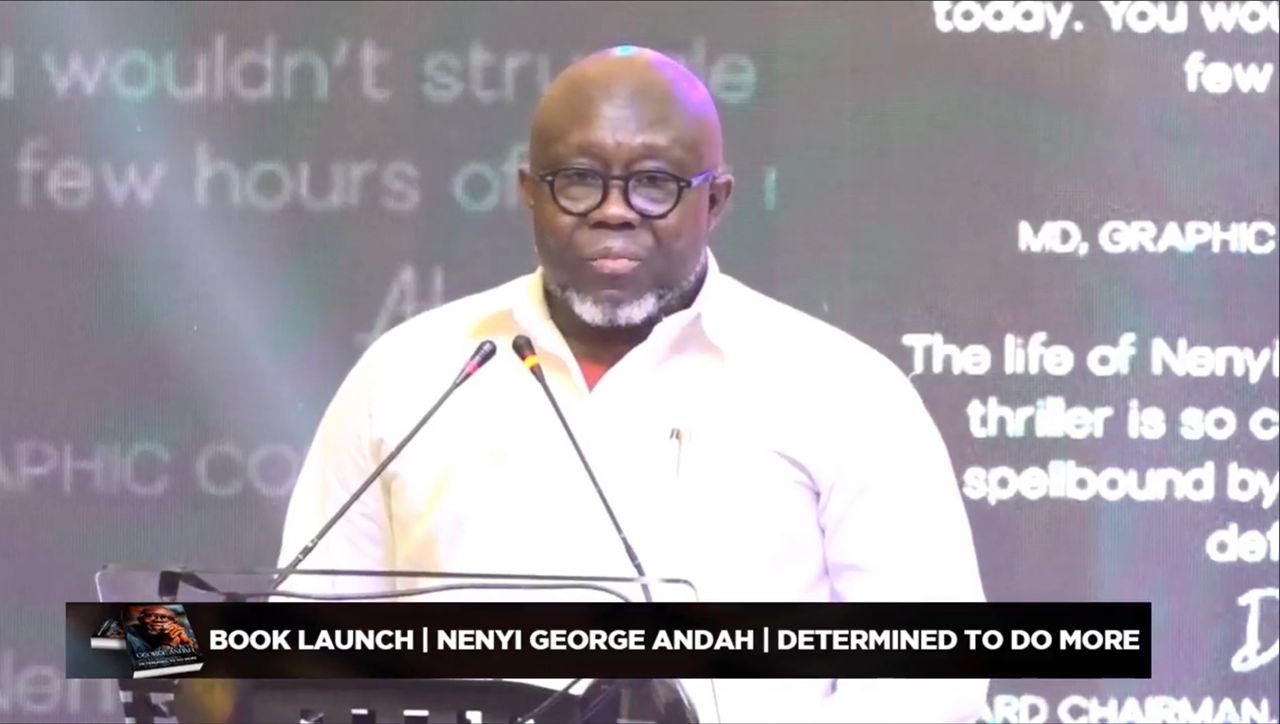 The former Member of Parliament for Awutu Senya West, Nenyi George Andah has listed 10 reasons someone gave him to discourage him from entering partisan politics when he decided to do so.

According to him, the person thought politics was not good for him, he [Andah] disagreed with the person and went ahead to engage in partisan politics.

The 10 reasons listed in pages 223 to 233 of his book, "Determined to do more," were read out by his friend and the Minister of Information, Kojo Oppong Nkrumah during the review at the launched of the book in Accra this week.

Mr Oppong Nkrumah said his reason for agreeing to read and review the book was to find out whether all that he had heard about George Andah was indeed true.

"It confirms for me a few things, the first reason for which I agreed to do a review and this was because, George I wanted to find out if all the stories I heard about you were true and indeed they are true. And the second reason is that Madam Elizabeth Ohene had said that this was the story of a young man who saw the possibilities of mobile money long before anyone believed Ghanaians could be persuaded to appreciate the merits of cashless transactions and I was thinking to myself, so you are the guy behind the E-levy and the experience we had in this country."

Mr Oppong Nkrumah said the reason the book excites him was that, 16 years ago when he [Oppong Nkrumah] started hosting the breakfast radio show on Joy FM he spent the first two years "messing up."

"I was a hopeless starter despite the fact that my management kept encouraging me, and I kept thinking to myself if only Komla [Dumor] had left me a book. If only Komla had left me something that outlined his experiences, maybe my mistakes will be less and for me it is critical that people who've been through various things, corporate, politics and any other facets of life, leave something that can open a window to those who want to follow that path to understand.

Reading from pages 223 to 233, which talks about George Andah's decision to enter politics and the battles, and the advice that he ought not to have entered politics, Mr Oppong Nkrumah read:

"When I decided to participate in active politics, someone who thought I was making a bad decision sent me what he called 10 reasons why politics was not good for me."

"To him the things associated with active politics do not conform to my [Andah] personality and my principles, hence I should stay away from politics," he continued

Mr Oppong Nkrumah then went ahead to read out the reasons which Mr Andah has reproduced in his book just as the person said to him [Andah].

In politics, you must understand the following:

Mr Andah wrote in the book that as much as he understood the sentiments raised in the pointers, "the question I asked myself is, if not me, then who. Where you like it or not, democracy is what we have allocated to ourself. We therefore need people to take active interest in it. It is therefore unfortunate that how some politicians have conducted themselves over the years has probably given credence to the sentiments expressed.

He further wrote: "We need to change these sentiments. The people must have the belief in the system of government because that is the only way true development can occur. I was motivated to contribute my part in making politics attractive to people like me, and indeed to all Ghanaians and to the best of my ability, that is what I've tried to do ever since I became part of frontline politics in Ghana."