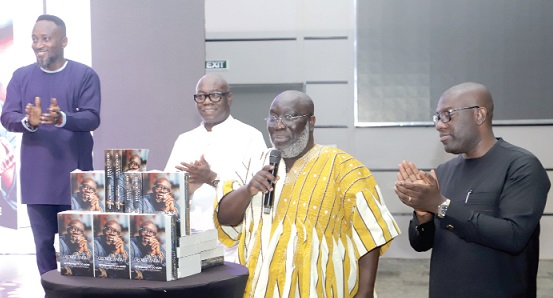 Isaac Emmil Osei-Bonsu (3rd from right), Board Chairman, National Communications Authority, unveiling the book with assistance from Kojo Oppong Nkrumah (2nd from right), Minister of Information. With them is Mr Reginald Daniel Laryea (3rd from left), Chairman of the Board of GOIL Company Limited. Picture: SAMUEL TEI ADANO Follow @Graphicgh

What started as an informal conversation 15 years ago on the need to chronicle personal ideas and life experiences became a reality for former Member of Parliament (MP) for Awutu Senya West, Nenyi George Andah, when he launched his first autobiography in Accra last Sunday.

To the Marketing Communications Specialist and Founder Member of OccupyGhana, Mr Andah initially laughed off the idea to give an account of his experiences in a book, but was challenged to take on the task of writing the book after his second meeting with playwright and author, Uncle Ebo Whyte.

Titled “Determined to do more: the mission is possible”, the book, which details experiences and everyday life lessons of the former deputy communication minister’s transition from the corporate world to active frontline politics, provides compelling life stories to buttress why the African youth can achieve exploits without seeking greener pastures outside the continent.

The 400-page book of 11 chapters does not only contain everyday memories and unusual happenings in Mr Andah’s life but also features interviews from prominent personalities across different spheres of the country and their experiences in a bid to inspire readers to be better than their former selves.

He said the literary masterpiece relayed the experiences of Mr Andah in the corporate and political worlds.

“His book is a must read for anyone contemplating the risk of transition from private to public life,” Mr Osei-Bonsu said.

He explained that the written experiences would serve as an "old cinematic frame through which those who want to succeed in the corporate world can see what success looks like in that space and how to achieve it".

Furthermore, the book, he added, provided a valuable insight and lessons for readers.

"Life is often about successes and failures and we are defined by how we react to both.

“George has experienced both great successes and great challenges, setbacks and failures, but how he reacted in these instances is a template worthy of notice," the chairman said.

The launch of the book, which was both in-person and online, saw a host of high-profile personalities ranging from politics, banking, telecommunications, marking, advertising and entertainment among other industry players in attendance.

Some of the prominent personalities present at the lunch included the Minister of Information, Mr Kojo Oppong Nkrumah; the GOIL Board Chairman, Mr Reginald Daniel Laryea; the Managing Director of the Graphic Communications Group Ltd, Ato Afful; a former MP for Kumbungu, Ras Mubarak; a former Minister of Education and former acting Editor of the Daily Graphic, Elizabeth Akua Ohene; a former Chief Executive Officer of the Kumasi Metropolitan Assembly (KMA), Kojo Bonsu and the Chief Executive Officer of MTN Ghana, Selorm Adadevoh, among others.

It was not just a night of talks to promote the book and its author, but an elaborate occasion that also brought together politicians from both the New Patriotic Party (NPP) and the National Democratic Congress (NDC).

At about 8 p.m., the Host of Peace FM’s ‘Kokrokoo and Board Member of the NCA, Kwami Sefa Kayi, who has also been featured in the book, mounted the stage to exhibit his auctioneering skills which saw Mr Osei-Bonsu become the highest bidder with $10,000, paving the way for Mr Oppong Nkrumah and Mr Laryea, being the second and third personalities to purchase the book at $6,000 and $5,000 respectively.

The information minister, in his review, recounted his torrid times hosting the Super Morning Show on Accra-based Joy FM after taking over from the late Komla Afeke Dumor, and stressed the need for people to share their experiences to guide generations after them.

“If only Komla had left me a book or something that outlined his experiences, maybe my mistakes would have been less.

“For me, it is critical that people who have been through various things, from corporate to politics and many other facets of life leave something that can open a window to those who want to follow that path to understand,” he noted.

Speaking to the media after the event, Mr Andah explained that the autobiography, which took him four years to write, was to inspire the youth to give of their best regardless of what they go through.