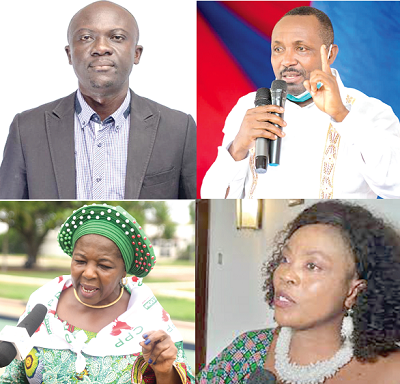 Four political parties have urged workers to put in their best especially during these challenging times of the global economy.

While commending workers for their dedication and contribution to the national development efforts, the two parties were hopeful for a better future for Ghanaian workers and the country as a whole.

Mr Boadu acknowledged that countries all over the world were experiencing downturns in their economies.

Fortunately, he said, the NPP government was working hard to turn things around for the betterment of all Ghanaians.

He also urged workers to take advantage of the challenges to create avenues to improve things for the better.

Mr Boadu called on the government to work together with the people to improve the working environment and the living conditions of Ghanaians.

For her part, Nana Sarpong-Kumankumah said although the party appreciated the efforts of workers towards increased productivity to resuscitate the economy, “the imposition of unnecessary taxes on Ghanaians poses serious threats for their survival.”

She said the mere promises by the government to address extreme poverty was simply inadequate.

She also called on the government to address the problem of unemployment in the country.

Nana Sarpong-Kumankumah acknowledged the contribution of workers for working tirelessly to sustain the economy.

Ms Nabla called on the government and employers to ensure befitting compensation to workers.

"We believe that a well- remunerated worker gives his/her best. To whom much is given, it is said, much is expected," she said.

The party also urged the government to as a matter of urgency address the concerns of the Civil and Local Government Staff Association of Ghana (CLOGSAG).

"The PNC does not support neutrality allowance but rather is in support of a better condition of service for CLOGSAG members. It is our appeal to the workers to cooperate with government in order to arrive at an amicable resolution of the problem regarding the neutrality allowance." She said.

The PNC assured the hardworking class that a future PNC government would make their wellbeing a priority.

Mr Edmundson called on the government to use the celebration to address problems confronting Ghanaian workers.

He said the establishment of May Day was to ensure worker’s rights and an eight hour work day was enforced, and also ensure that the poor conditions of service faced by workers, such as low salaries and wages, long hours of work, issues of pension, issues of housing, insurance, as well as issues of unemployment, were addressed.

“We in the PPP believe that the object of the occasion has not changed. Instead, the government has turned a blind eye to the needs of the worker and has not served their interests.

He said after several years of celebrating the occasion, unemployment rate was still high in Ghana and the Ghanaian worker was yet to receive and benefit from the significance of the event.

He called on the government to use this year’s celebration to focus on addressing issues of unemployment and deal with the problems confronting workers.

Writer's email This email address is being protected from spambots. You need JavaScript enabled to view it.