Covid may have killed over 80k health staff - WHO

BY: The BBC
Category: Health 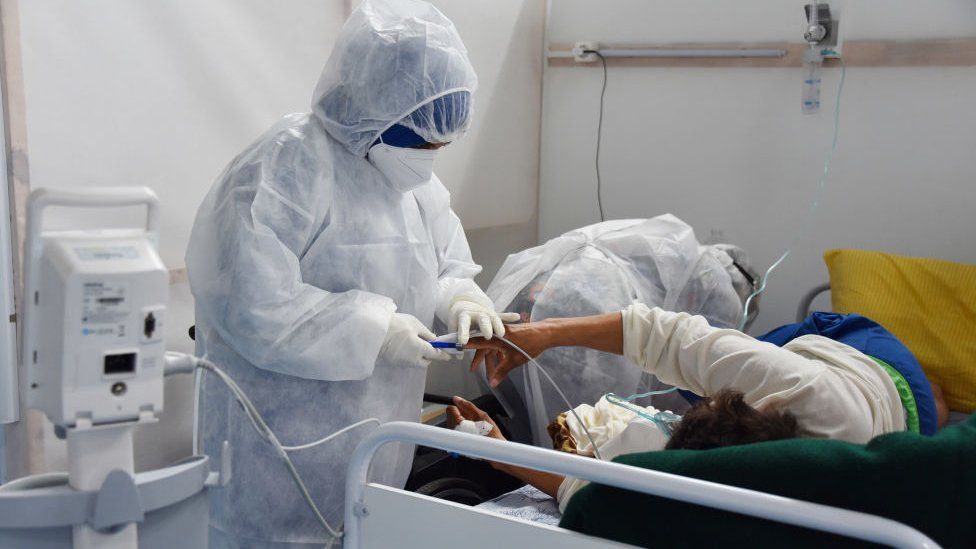 Covid has severely affected healthcare staff and may have killed between 80,000 and 180,000, the World Health Organization (WHO) says.

Healthcare workers must be prioritised for vaccines, WHO head Tedros Adhanom Ghebreyesus said, and he criticised unfairness in the distribution of jabs.

The deaths occurred between January 2020 and May of this year.

Earlier, another senior WHO official warned a lack of jabs could see the pandemic continue well into next year.

There are an estimated 135 million healthcare workers globally.

"But of course, that average masks huge differences across regions and economic groupings."

Fewer than one in 10 healthcare workers were fully vaccinated in Africa, he said, compared with eight in 10 in high-income countries.

A failure to provide poorer countries with enough vaccines was highlighted earlier by Dr Bruce Aylward, a senior leader at the WHO, who said it meant the Covid crisis could "easily drag on deep into 2022".

Less than 5% of Africa's population have been vaccinated, compared with 40% on most other continents.

The vast majority of Covid vaccines overall have been used in high-income or upper middle-income countries. Africa accounts for just 2.6% of doses administered globally.

The original idea behind Covax, the UN-backed global programme to distribute vaccines fairly, was that all countries would be able to acquire vaccines from its pool, including wealthy ones, writes BBC Global Affairs correspondent Naomi Grimley.

But most G7 countries decided to hold back once they started making their own one-to-one deals with pharmaceutical companies.

Dr Aylward appealed to wealthy countries to give up their places in the queue for vaccines so that pharmaceutical companies can prioritise the lowest-income countries instead.

He said wealthy countries needed to "stocktake" where they were with their donation commitments made at summits such as the G7 meeting in St Ives this summer.

"I can tell you we're not on track," he said. "We really need to speed it up or you know what? This pandemic is going to go on for a year longer than it needs to."

The People's Vaccine - an alliance of charities - has released new figures suggesting just one in seven of the doses promised by pharmaceutical companies and wealthy countries are actually reaching their destinations in poorer countries.

The alliance, which includes Oxfam and UNAids, also criticised Canada and the UK for procuring vaccines for their own populations via Covax.

Official figures show that earlier this year the UK received 539,370 Pfizer doses from Covax while Canada took just under a million AstraZeneca doses.

Oxfam's Global Health Adviser, Rohit Malpani, acknowledged that Canada and the UK were technically entitled to get vaccines via this route having paid into the Covax mechanism, but he said it was still "morally indefensible" given that they had both obtained millions of doses through their own bilateral agreements.

The UK government pointed out it was one of the countries which had "kick-started" Covax last year with a donation of £548m.

The UK has also delivered more than 10 million vaccines to countries in need, and has pledged a total of 100 million.

The Canadian government was keen to stress that it had now stopped using Covax vaccines.

The country's International Development Minister, Karina Gould, said: "As soon as it became clear that the supply we had secured through our bilateral deals would be sufficient for the Canadian population, we pivoted the doses which we had procured from Covax back to Covax, so they could be redistributed to developing countries."

Covax originally aimed to deliver two billion doses of vaccines by the end of this year, but so far it has shipped 371m doses.