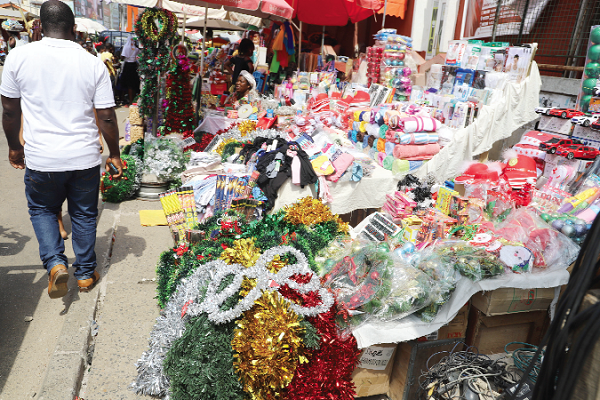 Some Christmas items on display at the Makola Market in Accra. Picture: ELVIS DOWUONA Follow @Graphicgh

Most markets and business centres across the country appear busy and bustling as the Yuletide approaches, but traders say sales are slow.

There is an influx of goods, ranging from foodstuffs, other edibles, drinks, clothing and other items usually well patronised during the Christmas festivities all around the markets and business centres.

From the central business districts (CBDs) in Accra and Kumasi to the markets in Takoradi, Sunyani, Tamale, Ho and Koforidua, there are busy activities, with traders and hawkers taking over pavements and pedestrian walkways, while prospective shoppers also flock these areas, hoping to get items on their shopping lists, a situation that has created both vehicular and human traffic in town.

However, traders and hawkers are complaining that patronage of their goods is very low.

Prospective shoppers, on the other hand, are lamenting the high prices of the items, some having gone up by as much as 50 per cent, compelling them to either do window shopping or buy only the essentials.

From Accra to Cape Coast, Sekondi-Takoradi, Kumasi, Sunyani through to Tamale, there are similar stories of congested markets and business centres but low or no patronage.

The prices of poultry, especially locally produced poultry, have increased drastically in the CBDs this year, compared to 2020.

Local poultry farmers are quoting the prices of live birds between GH¢70 and GH¢100, depending on the size.

Last year, the price of a locally produced bird was between GH¢35 and GH¢50.

The factors influencing the price hike include the lack of poultry feed, delay in supply of day-old chicks and general increase in the cost of production, which have combined to force majority of poultry farmers to either hold or reduce their broiler production for the upcoming festivities.

The Vice-President of the Ghana National Association of Poultry Farmers (GNAPF), Mr Napoleon Agyemang Oduro, told the Daily Graphic that the industry did not have enough birds for the market, going into the festivities.

“We would have loved to prepare well for the market, but from all indications, it is not the best, considering cost of production and the price of the birds to be sold.

“The cost of production has increased by over 100 per cent and I can even assure you that we are currently in business not because we want profit but to sustain the market,” he said.

Mr Oduro added that a wild card in the rocketing chicken market price was the cost of feed.

Mr Kwame Awuku-Adu, who owns one of the biggest poultry farms in the Greater Accra Region, Delawin Farm, said due to high operational costs, his farm did not produce broiler birds for the market this season.

The team observed that some of the items which had seen increases in their prices were vegetable oil, rice, soft drinks, dresses, footwear and home décor items.

Others are staple foods, such as maize, beans, tomatoes, plantain and cassava, with traders attributing the price increases partly to the general increase in prices and the COVID-19 pandemic.

At the Sunyani Market, considered a staple food trading hub, the price of a bag of maize has gone up from GH¢400 to GH¢430, while a bowl of the same commodity which used to sell at GH¢10 is now going for between GH¢14 and GH¢15.

Currently, five fingers of plantain at the CBD in Sunyani are sold for GH¢5, compared to GH¢3 during the same period last year.

Ms Akweley Doku, who sells pepper, said the price of foodstuffs had generally gone up, and that had subsequently affected her pepper business, as a result of which she was making little profit, which in turn was affecting her business capital.

The hike in the prices of foodstuffs around Christmas, she noted, was a usual phenomenon, but she was troubled about the low sales, saying if it continued in that direction, it could bring about hardship.

A tomatoes trader, Ms Priscilla Opoku, disclosed that she had to reduce the price of her tomatoes from GH¢700 per crate to GH¢400 in recent times, but she was still recording low patronage.

She said people might not be buying many of the tomatoes because of their poor nature as a result of the effects of climate change.

Live chicken, vegetables, children's clothing and shoes, as well as Christmas decorations and children's play toys, have increased considerably on the markets, particularly at Kotokuraba and within the Cape Coast metropolis, as the holidays get closer.

Although traders complained about low patronage, they were expectant that things would pick up as the festivities got closer.

A vegetable seller at the Kotokuraba Market, Madam Esi Badu, said she expected sales to pick up as the holidays got closer.

Mr James Adjei Acquah, a shopper, said once he had life, he was ready to spend, despite the high cost of goods, to make his family feel part of the celebrations.

Departmental stores such as Melcom have also seen increased patronage, as shoppers shop in preparation for the Yuletide.

Impact of relocation of market

In the twin-city of Sekondi-Takoradi, traders and shops have stocked Christmas goodies, although they say actual booms in sales are yet to happen.

They say at the same time last year, just about five days to the festivities, sales were good.

“What we are seeing now is actually different; people are window shopping, complaining they do not have money,” they said.

Madam Gladys Cheremeh of the Takoradi Temporary Market attributed the low patronage to the relocation of the Takoradi Central Market (Market Circle) to the temporary site.

“We used to have customers who came to us in the old market to buy, but after moving to the new market, we have lost a lot of our customers; our old customers do not know our whereabouts,” she said.

She said the closure of the borders due to the COVID-19 had also restricted the movement of goods from neighbouring countries, for which reason prices had gone up.

“We did not get the full complement of our wares, especially rice and others, and so the price of rice has gone up drastically. I cannot give you a price now because it may change by tomorrow,” she explained.

Cautious spending, getting the essentials

Many shoppers in Accra said they were being cautious with their spending to save for January when there would be school fees to pay, as well as the uncertainty over the cost of living when the 2022 budget was implemented.

From the CBD, the malls and other shopping centres, the stories were similar: items on shopping lists seemed priced out of buyers’ budgets, while others were making consideration for fees to be paid in January when a new academic year began.

“My shopping list is a very tall one, but the rise in prices has made it impossible for me to exhaust it, so I got only the essentials, looking out for value for money,” Mr Samuel Koomson, who was seen pushing out a trolley filled with assorted items from the West Hills Mall, said.

A woman, who identified herself only as Christie, a university student, said she was only at the West Hills Mall to do window shopping.

Madam Agnes Serwaa said with her set of twins set to go to university and another entering senior high school in January, the family had decided to spend on essentials such as food and leave out clothes, which had been a tradition for them.

“Each year, the children buy new clothes as part of the tradition, but things have been quite tough, as business has been slow. Besides, they are all going to school and that will require us spending more, so we have agreed that the money will be saved towards that.

“However, we will stock up with food because whether food items are expensive or not, we have to eat, so we have no choice,” she explained.

A cloth seller, Mr Nana Sarpong, expected patronage to increase in the days leading up to Christmas, as was often the case.

He admitted that the prices of cloths had shot up due to the rise in the cedi-dollar exchange rate and import duties.

“The exchange rate determines almost everything. When the dollar goes up, the things that we import are affected and so prices go up.

“Although patronage has been at its lowest this year, I’m hopeful that in the few days to Christmas, people will come for last-minute shopping, particularly those who receive their salaries late,” he said.