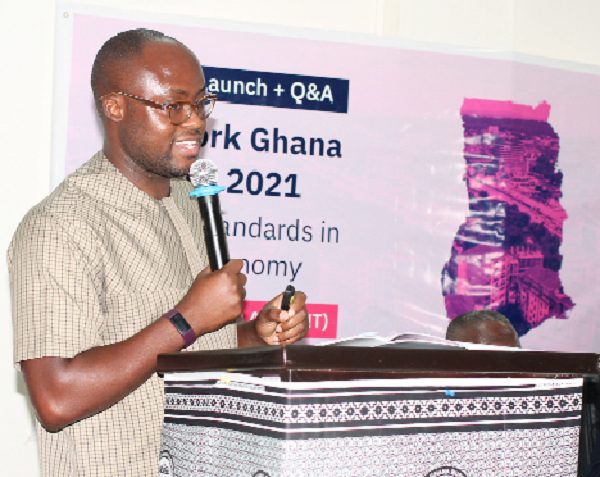 Workers of food delivery and ride-hailing platforms in the country face low payment and dangerous service conditions from their employers, a research conducted by Fairwork Ghana, a network of researchers that evaluates working conditions on digital platforms, has concluded.

Firework Ghana’s research was based on desk research and interviews with platform workers and managers in Accra, Kumasi, and Takoradi between May and October 2021, and called for stronger protection and more robust labour standards in the country’s platform economy.

The platforms were ranked against five fairwork principles of fair pay, conditions, contracts, management, and representation.

The study revealed that the majority of platforms analysed were yet to meet the basic standards of fairness when benchmarked against the fairwork principles.

The study also found Black Ride as the highest scoring platform, while popular platforms like Bolt, Uber or Jumia Foods scored only one point out of 10.

Sharing the findings of the report, the Country Manager of Firework Ghana, Professor Thomas Anning-Dorson, revealed that none of the platforms studied could guarantee that their workers earned enough to make a decent living after covering for work-related costs.

Again, he said, although half of the platforms had taken actions to protect workers from work-related risks, unsafe working conditions remained a major concern among the workers interviewed.

Additionally, he said, only two out of the 10 platforms analysed by the researchers provided evidence of clear and accessible contracts or terms of service.

Prof. Anning-Dorson said while half of the platforms assessed by researchers had a formalised process where workers could appeal decisions, only two of the platforms (Black Ride and Eziban) allowed for collective representation of workers.

The Project Lead and a Professor of Information Systems at the University of Ghana Business School (UGBS), Prof. Richard Boateng, said the report would provide a helpful guide for both regulators and customers who use these platforms.

He said after Fairwork Ghana's engagement with some of the platform managers, several platforms — including Black Ride — had made changes to their policies to improve working conditions such as setting up an anti-discrimination policy and announcing the willingness to negotiate with unions or workers associations.

He said the fact that most platforms were yet to meet basic standards, however, showed the need for further intervention in the sector.

The Chairman of the National Alliance of Digital Drivers Union – Ghana, Mr Bismark Fiifi Tetteh, commended Firework for making efforts to help highlight the needs and set the standards for fair working practices in the Ghanaian platform economy.

“The fairwork principles are tried and tested in different countries and provide the needed benchmark for the assessment of all digital platforms in the country, and from now on, there will be no hiding place for platforms that have deliberately ignored the plight of platform workers in Ghana,” he said.

The scores awarded to the platforms, he said, confirmed what workers had been advocating in the past few years.

He further called on the government to revise the country’s labour laws to cover the new forms of work brought about by the digital revolution.