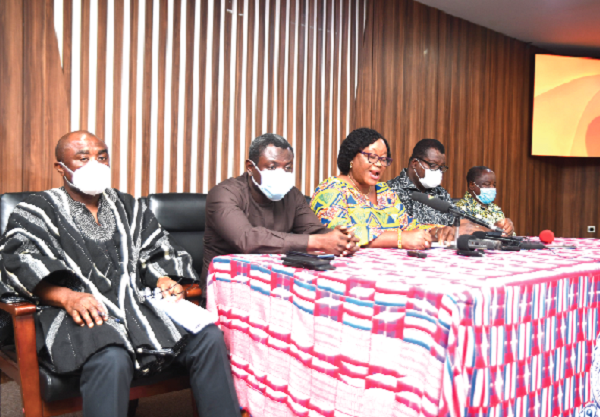 Three teacher unions have appealed to the government to absorb the interest charges on the 30 per cent that has accrued from the Ghana Education Service Occupational Pension Scheme (GESOPS) pre-financing laptop agreement.

They said although they earlier intervened for the teachers to pay GH¢509 instead of 549.44 as a result of 18.16 per cent interest charged on the original amount of GH¢465 (being 30 per cent of the cost of laptop), as a result of a pre-financing loan teachers were supposed to pay, there was the need to maintain the GH¢465 for teachers in view of current economic conditions, among other things.

According to the unions, the initial price of the laptop was GH¢1,550 and the 30 per cent component to be paid by teachers was GH¢465. But because the GES, on behalf of the Ministry of Education, went to engage GESOP for a loan to pre-finance the project, it took the price to GH¢549.44 as a result of the interest charged on it.

However, following the intervention by the unions, the price was reduced to GH¢509, but they still wanted it to be reduced further to the GH¢465.

Speaking on behalf of the unions at a press conference in Accra today (Tuesday), the President of GNAT, Ms Philippa Larsen, requested that GES ensure that all deducted money for the laptops be supplied by the close of this month.

She said before the announcement by President Nana Akufo-Addo that government was facilitating the acquisition of 280,000 laptops for teachers, GNAT had at its September 20 launch of its research work on the impact of COVID-19 on the education sector, advocated for one, teacher, one, laptop.

That advocacy, she said, was laid before the GNAT National Council at its Annual General Meeting between September 30 and October 3, 2020 in Kumasi and subsequently included in its communique, asking the government to expedite action on the project to enhance delivery in the classroom.

“NAGRAT and CC-GH had also engaged their councils on the one teacher, one laptop project.

Following this, the three teacher unions discussed how they could strive for the project with a collective voice.

From this point, the teacher unions continued their engagement with the Ministry of Education and the GES on the subject matter,” she said.

Ms Larsen said that led to the signing of a memorandum of understanding (MOU) as a sign of commitment that government would fulfil its promise to teachers, adding that subsequently, Messrs K.A. Technologies Limited was recommended to the Ministry of Education in their consideration of suppliers for the one teacher, one laptop project which was included in the MOU.

Initially, she said the teacher unions advocated for the full cost of the laptops to be borne by government, however, upon several days of negotiations and deliberations, the “government agreed to bear 70 per cent of the cost and the members, 30 per cent”.

That, the GNAT President said, was for the 280,000 laptops as well as the provision of technical support, maintenance, training and equipping pre-tertiary teachers to provide virtual teaching and learning for their students.

“The unit cost of the laptop was GH¢1,550 with the 30 per cent component to be paid by the teacher from the annual continuous Professional Development Allowance,” she said, adding that “this was our level of involvement in the one teacher, one laptop project.

The rest of the processes of procurement, award of contract, financing and distribution were done by the Ministry of Education and the GES”.

Ms Larsen said the Ministry of Education then proceeded to the Public Procurement Authority to request for approval to use single sourcing to engage suppliers for the supply of the laptops for pre-tertiary teachers.

That, she said, was per a letter dated November 17, 2020 to which approval was granted via the Public Procurement Authority signed by Mr Frank Mante, acting Chief Executive and addressed to the Minister of Education.