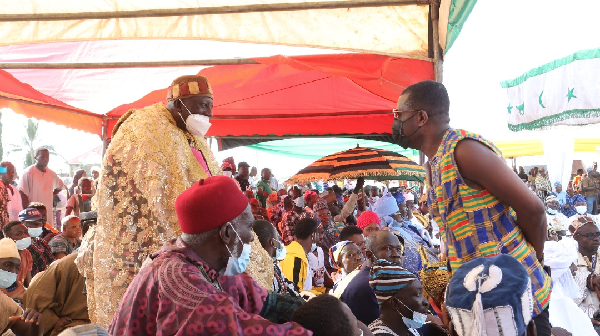 The leadership of the Wangara ethnic group in Ghana has called on the government and other development partners to renew their efforts at enhancing the nation's tourism potential.

At a grand durbar to climax this year’s Benkadi Kurubi Festival in Kintampo in the Bono East Region, the Overlord of the Wangaras in Ghana, Masaba Sariki Nana Fanyinama, said the tourism sector held high prospects in boosting the national kitty to accelerate development.

Nana Fanyinama stressed the importance of peace to development, saying the two worked together.

He noted that anything short of a peaceful atmosphere was inimical to development, and stressed that the area had over the years contributed to the nation in various ways, including agriculture, tourism, sports and culture.

He, however, bemoaned the lack of infrastructure such as good roads to tourist sites and educational facilities, among others.

The people of Kintampo in the Bono East Region celebrate the Benkadi Kurubi, an Islamic festival, which means light.

It is celebrated in the third quarter of the year, usually in the third week of November, to offer thanks to God, plan for development and make merry.

This year's event was dubbed: "Promoting domestic tourism and fostering national cohesion through festival" to highlight the tourism potential of the region to improve the infrastructure and patronage of the sector along with the attendant revenue.

The Wangaras in Ghana and beyond are said to consider Kintampo as their spiritual home, and many of them travel there for the celebration.

The Deputy Minister of Tourism, Arts and Culture, Mr Mark Okraku Mante, urged the people of the area to tap into the tourism potential of the place, saying the area was blessed with huge tourism potential that could fetch a lot in revenue for national development.

He, therefore, encouraged the municipal assembly to invest in tourism in the area to improve the quality of infrastructure while adding value to the available facilities.

The Minister of Lands and Natural Resources, Mr Samuel Jinapor, called for a conscious effort to make Kintampo a centre of excellence in the arts and culture sub-sector because of its unique location at the centre of the country.