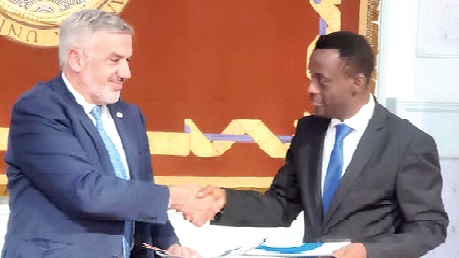 The Western Regional Coordinating Council has established a joint cooperation with the Ports Gran Canarias of Spain to identify projects of mutual benefit to the two countries.

The cooperation will focus on areas such as renewable energy, energy efficiency and water technology, ports and harbours, innovation, as well as information technologies, among many other areas.

Three memoranda of understanding (MoUs) establishing the cooperation cover areas of economy, scholarships from the University of Las Palmas for students from the Western Region, and the Port of Takoradi collaborating with the Port of Las Palmas.

At the opening ceremony of the Ghana Forum, the Western Regional Minister, Kwabena Okyere Darko-Mensah, said the agreement was to establish a permanent framework for action between the Government of the Canary Islands and Ghana through the Western Region.

He said the two sides would ensure the identification of projects of economic interest in the sectors of economic and business cooperation, entrepreneurship, renewable energy, water technology, innovation, information technology, among others.

In other areas of tourism, the minister said, the region was adorned with about 192-kilometre coastline with sandy beaches, forts and castles, forest reserves, and a village on stilts (Nzulezo), making the region one of the country’s important tourist destinations.

Mr Darko-Mensah said “the Cooperation Agreement, which was made in Las Palmas de Gran, on April 7, 2022, between the Administration of the Autonomous Community of the Canary Islands, Regional Ministry of Economy, Knowledge and Employment, and the Western Regional Coordinating Council of the Republic of Ghana has been given further impetus by our very presence here at this ceremony”.

The RCC, he said, in accordance with Section 188 of the Local Governance Act, 2016, Act 936, had the mandate to monitor and coordinate the implementation of policies, programmes and projects.

He said it was important to encourage the respective public and private sectors to work jointly in favour of the sectors set out in the Cooperation Agreement.

Mr Darko-Mensah said it was crucial to make efforts to promote, diversify and increase economic and business cooperation by encouraging foreign direct investment, creating joint ventures, supporting public and private initiatives and promoting the existing business opportunities to the economic operators of the regions.

He said it was the expectation of the RCC and its counterparts in the Canarias that “this trade and business relationship, which is being cemented today, would contribute to our mutual benefit and to make us fulfil our mandate to our people who are eagerly yearning for development”.

The Regional Minister of Economy, Knowledge And Employment of The Canary Islands, Mrs Elena Máñez Rodríguez, expressed her outfit’s commitment to the collaboration.

The two regions, she said, had a lot to offer and that through collaboration, the people of the two countries would be the beneficiaries.