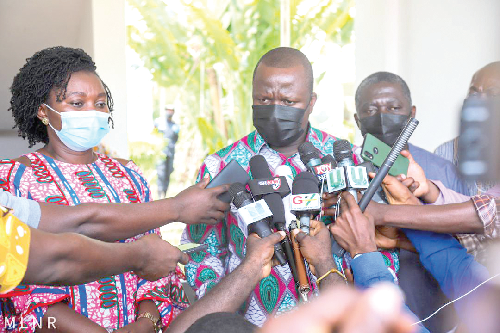 The Minister of Lands and Natural Resources, Mr Samuel Abu Jinapor, says the resilience of cartels and syndicates in the illegal mining business would be matched with an even stronger resilience in the fight against illegal mining commonly called galamsey.

He said once such illegal activities were lucrative, it was expected that the fight would not be an easy one.

However, he said, the ministry would deploy workable strategies and put in place more resilient measures to counter all illegalities in the mining sector to protect the country’s natural resources for the nation's survival and for posterity.

The minister was speaking to the media in Cape Coast after a courtesy call on the Central Regional Minister, Mrs Justina Marigold Assan, as part of his working visit to the region.

He was accompanied by a Deputy Minister, Mr Benito Owusu-Bio, and other officials of the ministry.

The minister toured some of the mining communities in the region, called on the President of the Central Regional House of Chiefs and met the workers of the various agencies under the ministry.

Mr Abu Jinapor said it was obvious that those who were involved in the illegal mining business were resilient, stubborn and recalcitrant, and were not willing to give up on the illegality without a fight.

Mr Jinapor said although the military’s efforts were achieving some results, that alone could not bring the expected results if the communities were not engaged to support the fight.

He emphasised that the fight against galamsey was one for everyone who was concerned about the environment and nature, stressing that it was important that all stakeholders continue to support and complement efforts to ensure that the mission to protect the natural resources of the nation was achieved.

Mrs Assan said to effectively combat the activities of the illegal miners, more resources and logistics were needed at the regional and community level, emphasising that without the inclusion of communities and other stakeholder agencies, very little would be achieved.

She said it was only when ownership of the fight was shared with the local communities that the fight would be won.

Mrs Assan said there was the need for vehicles and other logistics at the local level that would ensure perpetrators were pursued, arrested and brought to book.

"They know how to swim and sometimes you see them running and you can't pursue them," she said.

She described the consequences of galamsey on the water bodies as extremely bad, adding that there was the need for more aggressive effective efforts to halt the destruction of the environment and ensure that the destroyed lands and rivers were restored.

In the interaction with the Central Regional House of Chiefs, Mr Jinapor appealed to the house to support the galamsey fight.

He intimated that illegal mining could not thrive when the "critical tripod" of traditional authorities, political authorities and securities agency heads were committed to the fight.

The President of the Central Regional House of Chiefs, Odeefuo Amoakwa Boadu, called for communication strategies from the ministry to educate all on the new land administration laws.

He further pledged the support of the house to the fight against illegal mining activities in the communities.

Addressing workers of the Lands Commission and the Forestry Commission, Mr Jinapor urged them to protect the sanctity of the institutions in accordance with the new law governing land administration in the region.gen