The new Vice-Chancellor of the University of Energy and Natural Resources (UENR), Sunyani, Professor Harrison Kwame Dapaah, was sworn into office yesterday by the Chairman of the Council of the university, Professor J.S.K. Ayim.

He is the second vice-chancellor of the university which was established by Act 830, 2011 with the core mandate to provide higher education, disseminate knowledge and undertake research related to energy and natural resources.

Prof. Dapaah succeeds the foundation Vice-Chancellor, Prof. (Mrs) Esi Awuah, who steered the affairs of the university from its establishment in 2012.

Prof. Ayim expressed hope in the new vice-chancellor to live up to expectation.

In 2009, he joined the University of Education, Winneba (UEW), Asante Mampong Campus, as a senior lecturer at the Department of Crop and Soil Sciences Education.

Until his appointment as the vice-chancellor of the UENR, Prof. Dapaah was the Principal of the College of Agriculture Education of the UEW, Mampong Campus, a position he had occupied since October 1, 2012.

He also had oversight responsibility, from October 2014 to April 2015, as the acting Principal of the UEW, Winneba, Kumasi Campus, until a substantive principal was appointed. 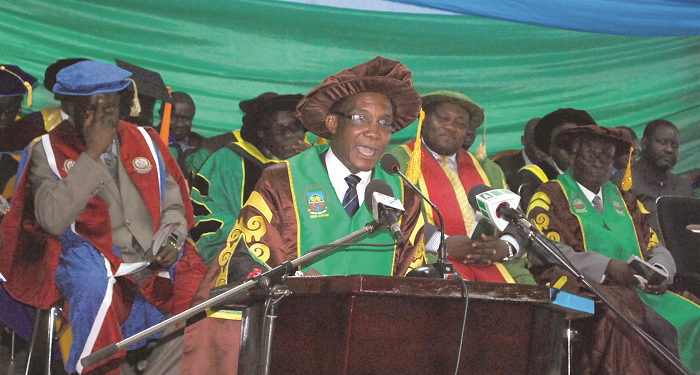 Prof. Dapaah has authored and co-authored over 80 journals, edited conference papers, books, monographs and research reports and continues to provide editorials and review services for a number of journals and book publishers.

In an address, the new vice-chancellor said the future of higher education was being shaped by several factors, including internationalisation, technology, commercialisation, students’ insatiable quest for access to higher education and dwindling budgetary allocations viz-a-viz the need to maintain the academic momentum.

“I believe the way to make the difference in future is by focusing on both the fundamentals and the big drivers in the present,” he said.

According to him, his administration would pursue vigorous staff training and development to build the competencies and skills of staff, while embarking on aggressive infrastructural development.

“I will also promote academic excellence in teaching, learning and research and work towards a strong research orientation to position the UENR as a research university,” he added.

He promised to pursue teamwork and an open and transparent administration and promote the culture of creativity, initiative and innovation.

The pioneering students have graduated and are already doing their national service.

The university now runs undergraduate programmes at its School of Engineering, School of Sciences, School of Natural Resources and the School of Agriculture and Technology.

In 2014, it established the School of Graduate Studies to supervise and coordinate the running of postgraduate programmes such as Sustainable Energy Management (master’s and doctorate); Environmental Engineering Management (master’s and doctorate); M.Sc, Applied Statistics; M.Sc/MPhil/PhD Biomathematics and MPhil/PhD Social Forestry and Environmental Governance.