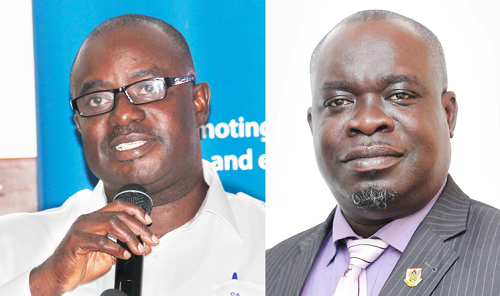 A meeting between the government and the University Teachers Association of Ghana (UTAG) to bring an end to the strike by members of the association ended in a stalemate last Tuesday.

According to UTAG, since there was no resolution to their grievances, the strike would continue across the various universities in the country.

The President of UTAG, Prof. Charles Marfo, who said this in an interview with the Daily Graphic Wednesday, August 4, added that “there was a stalemate, meaning there was no resolution”.

According to him, the issue had been communicated to the National Executive Committee (NEC) of the association, which had also directed the various campuses to meet and decide on the way forward.

Regarding the National Labour Commission’s (NLC’s) invitation to UTAG, Prof. Marfo said the association had received the letter from the commission and would respond to it.

He said apparently the NLC had wanted UTAG to meet the government, and that now that it had done that, the association would write to the NLC to ask it to reschedule the meeting, since the UTAG leadership had to get back to its members to share the fallout of the engagement with the government.

Prof. Marfo said the association would, therefore, not be able to meet the NLC today, in view of that development.

Last Monday, the NLC invited UTAG and the Senior Staff Association-Universities of Ghana (SSA-UoG) to appear before it today for the hearing of their matters in dispute with their employers.

With its intervention, the commission directed the two associations to call off their indefinite strike.

Last Monday, the two associations carried out their threat to strike over poor remuneration.

While UTAG is calling for the restoration of its 2012 salary values, the SSA-UoG said the government had failed to respect and fulfil agreements with the association.

Meanwhile, SSA-UoG has said it will honour the invitation by the NLC to discuss the issues relating to its strike.

It, however, said the directive from the NLC to the association to call off the strike could not be met, as the time frame given to it was too short to do that.

The association said a NEC meeting would have to be convened to take a decision on the directive.

“Yes, I received the NLC’s letter on Monday and we will attend the meeting today. The procedure involved in calling off a strike at the NEC does not support a short period of notice, as has been given to us.

“The decision to call off the strike does not lie with the national chairman to sit in his small corner and say that the strike is over. The fact that we want to respect the directive of the NLC does not mean that it should tie our hands, close our eyes and ask us to run,” the National Chairman of the SSA-UoG, Mr Zakaria Mohammed, told the Daily Graphic yesterday.

He said the SSA-UoG strike would continue until next week when the NEC will convene a meeting on the matter.

The SSA-UoG, in an earlier statement signed by its National Chairman, mentioned the May 19, 2021 60-day ultimatum to the government to resolve all its concerns in relation to the computation of Tier Two Pension on the accumulated (2010-2016) principal amount paid on May 17, 2021, and its refusal to establish a payment plan, as well as the finalisation of conditions of service, which had not been reviewed since 2008.

“The June 9, 2021 agreement between SSA-UoG and the Fair Wages and Salaries Commission, supervised and witnessed by Vice Chancellors Ghana and the Ghana Tertiary Education Commission, to use the period from June 30 to July 19, 2021 to conclude all outstanding negotiations, unfortunately, painfully and frustratingly turned out to be a hoax on its expiration,” it said.

Again, it accused the government of a contemptuous attitude in the form of disregard for the NLC’s directive on January 28, 2021, on hearing from both parties, to resolve concerns within a three-month period, which also elapsed on March 31, 2021.

“For the avoidance of doubt, all members of the senior staff associations across the 16 public universities in Ghana (SSA-UoG and FUSSAG) are required to lay down their tools, without exception, until further notice,” he said.