UEW sets up 'healing and reconciliation commission' for peace on campus 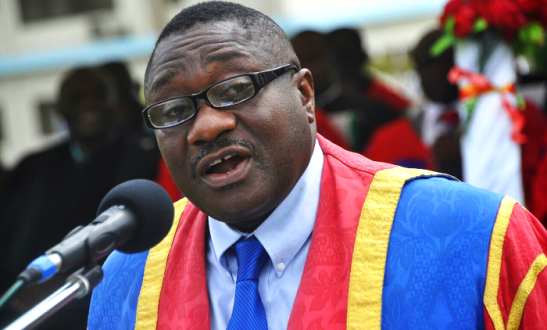 The governing council of the University of Education, Winneba (UEW) has set up a healing and reconciliation commission as part of a roadmap towards achieving peace at the university.

It is part of the moves touching on the recent happenings at the university, which led to the reinstatement Prof Mawutor Avoke as the Vice-Chancellor.

Speaking at the 26th Congregation of the university on Saturday, Prof Avoke said the commission would receive petitions and complaints and make the necessary recommendations towards achieving lasting at the university and gave the assurance that he would support efforts at promoting an atmosphere of peace and harmony in the university adding he believed the university must work to harness all it's human resources to move the university forward.

Prof Avoke expressed gratitude to all who worked to ensure the reinstatement of affected officers and said his administration was determined to pick up the pieces from where the previous administration left off to build together an even stronger university.

In his address the Chairman of the university's Governing Council, Nana Ofori Ansah expressed worry that some agents of the old and acrimonious and chaotic era at the university were bent on working at frustrating the peace process.

"Unfortunately some of these saboteurs are suspected to be principal officers of the university who have vowed not to accept the ruling and orders of the High Court, Winneba, and have decided not to cooperate with our reinstated colleagues.”

“It is strongly believed that some of these saboteurs are using surrogates to fight the orders of the High Court, Winneba at the Supreme Court describing such moves as unfortunate," he stated

"It is my humble prayer and appeal that these persons will see reason so that we cooperate with each other for the good of this university for however long it takes peace and harmony shall overcome divisiveness and wickedness and with Christ in the vessel, UEW will smile at the storm," he added

He said he was optimistic that with the education acquired they were equipped to impact the world positively and urged them to use the knowledge acquired to make the world a better place.

He urged graduates to combine hard work and honesty to achieve success.

He indicated that without hard work and the values of honesty and integrity, paper qualifications would be worthless.

He said they were responsible for their own future successes adding that they had achieved a degree which was a great feat many have not achieved and must be determined to work to make the degree impact their lives positively.

"Your future is basically is in your hands therefore you cannot blame anyone from now on if you allow others to determine your future strides for you," he added.

He urged them to resist the temptation of getting rich quick but to seek mentors and build networks that would positively guide them and be good ambassadors of the university.

At the 26th Congregation of the University of Education, Winneba (UEW) which was climaxed on Saturday, the women showed the men their class and pushed them aside by sweeping 82 out of the 101 first-class awards. They left the men with 19.

A total of 10,314 students graduated in all including 2,575 diplomates 6,887 first degrees while 852 graduated with master’s degrees and doctorate degrees over the five-day sessional congregation ceremonies.

The university graduated 9,462 diplomates and undergraduates.

The UEW Vice-Chancellor, Professor Mawutor Avoke commended the females for the positive strides made describing them as overwhelming.

He urged the graduates to use their degrees to change their lives and the world for the better.

He noted that though they were graduating at a challenging time of high unemployment, he was hopeful they were trained to explore the world and take advantage of opportunities to impact their lives.

He urged them to strive for honesty and integrity and use their critical thinking abilities to achieve their goals.